Adèle was born in Southampton and graduated in drama from Birmingham University. She started transition in 1973 with Dr Randell at Charing Cross Hospital. She worked as a civil servant and as a secretary, and was attempting to become a jazz singer. 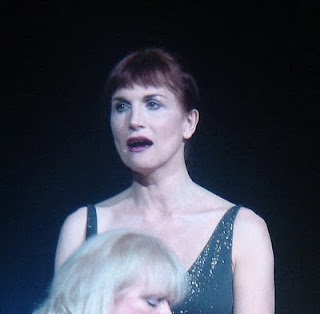 In 1984, she auditioned for the all-girl singing group Fascinating Aida, where she impressed with her vocal range. A niggling doubt caused one of the others to actually ask if she were a man, which Adèle denied. However she was accepted into the group.

An old friend of Dillie Keane had known the pre-op Adèle and later on told her, but Dillie and the others sat on the knowledge until a review in the Financial Times of their performance at the Edinburgh Fringe in 1985: “You could have fooled me that the one with the smoky brown voice isn't a man in drag”, which Adèle took badly, and Dillie and the others told her that they knew and that did not make any difference.

But the press had started to sniff out the story: they phoned Adèle’s parents late at night. The group decided that the press had to be told, and supported Adèle before and after she gave an interview. Later Dillie would deflect questions on the topic by claiming that she was the transsexual in the group.

Adèle had a cameo in the film Lady Jane, 1986 , and in Company Business, 1991 playing a Marlene impersonator in a Berlin drag bar, and was special advisor for the transsexual love story Different For Girls, 1996.

Fascinating Aida was retired in 1989, revived in 1994, retired in 2004, revived in 2008. Dillie and Adèle are the only early members still involved, and are still performing 25 years after they met.