Born possibly as Hal Wadell in Texarkana, Texas in 1892, or as Ramon Icarez near Chihuahua, Texas in 1898, Ray Bourbon enjoyed embellishing his life story. He claimed that his first lover was the ranch foreman who was subsequently murdered, that Pancho Villa helped his mother at this time, and that he ran guns (in drag) for Pancho Villa, as the mysterious ‘La Senora Diablo’, that he was the illegitimate son of Franz Joseph of Austria and Louisa Bourbon, and that he was a student at the Tulane Medical School in New Orleans.

It does seem that he was in England in 1913 and managed to get small roles in shows in Music Hall. He returned to the US in 1917, and began using the name Ray or Rae Bourbon. He married for the first time, and a son was born in 1918. 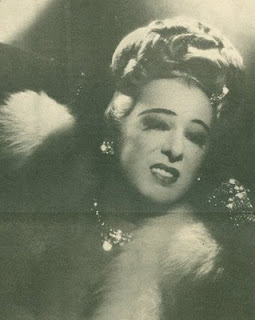 Ray may have won a Photoplay contest resulting in work at a Hollywood studio. He had cameos in a variety of silent films, including as the stuntman for Estelle Taylor and a stand in for Clara Bow. He has been identified in some of the Rudolph Valentino pictures, and played an old woman in Pola Negri’s Bella Donna, 1923. As Ramon Icarez he was a ‘fire dancer’ at the opening of the Los Angeles Coliseum in 1923.

In the mid-1920s he was working with Bert Sherry and later toured with the Martin Sisters. By 1932 he was working fulltime as a female impersonator. His performance at Tait’s in San Francisco in 1933 was being broadcast live when the club was raided by the police. He was one of the big names of the Pansy Craze of the last years of Prohibition. He had a small role as a dancer in the film Golddiggers of 1937. He worked at Finocchio’s drag nightclub in San Francisco, and with Mae West in her shows Catherine was Great, 1944, and Diamond Lil, 1948.


In 1956 Rae claimed he had approached Johns Hopkins Hospital to have had a sex change, but was told that it was impossible. He then went to Dr Emerick Szekely, a Hungarian refugee from the Nazis living in Juarez, who had performed the operation. Rae at different times claimed that she had had the operation to avoid cancer, and to avoid local laws against cross-dressing. However he still stood to urinate, and off-stage still lived as man. In a club in West Hollywood in 1956, Rae was billed as ‘not a female impersonator’, and was charged and convicted of impersonating a female.

Rae was also charged with female impersonation in Seattle, El Paso and New Orleans in the next few years. However in Miami she was arrested for impersonating a man.

In 1967 his car caught fire in Texas. Rae saved his dogs, and lodged them with Blount’s Pat-A-Zoo. Rae couldn’t pay the bill and A.D. Blount sold them for medical research. Rae was upset by this and wrote to the Governor of Texas and the newspapers about it. In December 1968, two young acquaintances drove Rae’s car to Texas using his money, and, while roughing him up, one of them killed Blount. The two young men were convicted of murder with malice, and Rae, accused of paying the men to kill Blount, was convicted of accomplice to murder. Rae was 75 and in ill health: he had a serious heart attack while awaiting trial. He was sentenced to 99 years in prison. 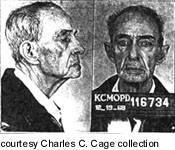 He accidentally escaped once when a door was left open, but merely went to sleep around the corner. He obtained a typewriter from his lawyer, and started writing his memoirs. He wrote 300 pages before dying of leukemia complicated by a heart condition.

He was married twice to women, and fathered a son. He had both male and female lovers, and was said to fancy young men, but never referred to himself as gay or bisexual.