David Shayler was born in Middlesborough and raised in High Wycombe. He read English at the University of Dundee, where as editor of the student newspaper he published extracts from Peter Wright’s Spycatcher at a time when it was banned in the UK. After graduation he worked as a journalist for 6 months at The Sunday Times, before being fired.

In 1991, he answered an oblique advert in The Observer, which resulted in him joining MI5. By his own account, he worked in vetting Labour Party candidates, then Irish activists, and then on the Libyan desk at a time when MI6 was involved in an attempted assassination of Muammar al-Gaddafi without ministerial approval. Shayler left MI5 in 1996.

In 1997 he claimed that the security knew in advance of the 1993 Bishopsgate bombing and the 1994 bombing of the Israeli embassy. After giving details to the press, he fled to the Netherlands and then France. From August to November 1998 he was held in a French prison until the French courts decided that the UK extradition request was politically motivated and therefore not valid. In August 2000 he voluntarily returned to the UK. He was charged under the Official Secrets Act and sentenced to 6 months in prison, and served seven weeks. 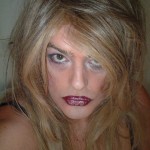 He has announced that he was anointed as the messiah on 2 July 2007. His powers allow him to influence the weather, prevent terror attacks and predict football scores. His ‘channeling of the light’ put Middlesborough Football Club into the UEFA Cup Final.

Recently he has been living in a squat in Surrey. He is now frequently presenting to the world as Dolores Kane, a persona that he had previously kept private, while growing hemp and waiting for the world to end in 2012. He explains that his ‘up-and-at-them’ male energy had to balanced by a strong feminine energy, and Jesus was a transvestite also.