Donald Gann, and raised as a Southern Baptist.

As a teenager he had earned a lot of money selling Mary Kay cosmetics to bored housewives, and at college he had first practiced the act that evolved into Karen Dior.

He moved to Los Angeles in 1988. Offstage he remained a man, but in character as Karen she was called ‘one of the most beautiful women in Hollywood’. She was an early fri 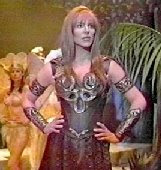 She also acted under the names: Geoff Dior, Rick Van and Geoffrey Karen Dior. She did a few television commercials that emphasized her gender-bending. She also sang with The Johnny Depp Clones, and in 2001 wrote a kiss-and-tell autobiography.

She had had encountered Eddie Murphy in the late 1980s, and spoke up during the scandal in 1997. She was one of those who refused the pressure and bribes from Murphy’s lawyers even though she was ill with AIDS at the time.

As Geoffrey, he became an ordained minister, and earned a Ph.D. in Philosophy of Religion.

He died at the age of 37 from hepatitis stemming from AIDS.