The Press sisters were raised in Kharkiv in the Ukraine. They were Jewish and their fat 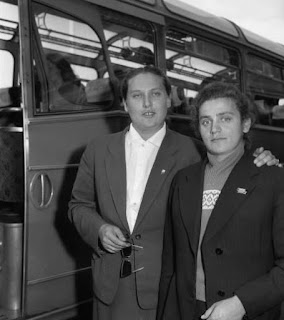 her had died in th

They studied at the University of Leningrad and were trained at VSS Trud and Dynamo. Tamara excelled in shot put and discus throwing. She won gold and silver medals at the 1960 Rome Olympics and the 1964 Tokyo Olympics. Irina won a gold in hurdling in Rome and a gold in the Pentathlon at Tokyo. Between them they set 26 world records.

They both retired in 1966, which was coincidentally the year that sex testing for athletes was introduced. There were rumours that they were intersex or even men, or that they took male hormones. They remained

Irina joined the KGB and became an officer in the border troops. Tamara became a civil engineer and wrote several books about sport and about civil engineering.

Ukrainians, like Russians and Greeks and most East Europeans, femininize women's surnames usually by adding a vowel, often 'a'. E.g. Putin's wife is Putina. So why is 'Press' not so feminized? Is 'Press' a Ukrainian name?
Time: 12:40