See also A short History of (Harry) Benjamin Syndrome
and Numbers and HBS.
and my review of Goiar's 2021 book.

Charlotte is a resident of Vigo in Galicia. She was diagnosed by the school psychologist as a trans child at age 7, and from age 16 was on hormonal therapy from the Vigo hospital - the first such patient to be so treated in Vigo.  However she met much derision at school from both students and teachers and was unable to complete high school.   Since 1991 she has been in psychiatric treatment, and living on welfare.

In the early 2000s Goiar proposed the concept of Síndrome de Harry Benjamin (Harry Benjamin Syndrome). The term had been pioneered by Tom Reucher in Paris with an inclusivist meaning, but Goiar changed the meaning to exclude most trans persons.   She set up www.shb-info.org in 2005, and while posting on the Australian WOMAN forum encountered Diane Kearny in the US, who had similar opinions.  They initially worked together, but then split and in competition both set up web sites, Yahoo forums and Standards of Care.

In 2004, the Spanish Socialist Workers’ Party (PSOE) became the government, and quickly implemented gay marriage, but kept delaying the promised Ley de Identidad de Género (Gender Identity Law) until prominent trans woman and PSOE activist Carla Antonelli threatened a hunger strike and this attracted international press attention.  The law was passed in 2007, and Carla, Charlotte and many others were able to change their legal name and gender as surgery was not a requirement.

A decree by the previous government in 1995 had prohibited public health services from paying for transgender surgery. This was rescinded, also in 2007. By then, Andalusia had already been performing these operations for eight years, and this region was later joined by Madrid, Catalonia and the Basque Country. Aragon and Extremadura paid to have patients treated elsewhere. However Galicia and other regions did what they could to avoid offering transgender surgery.
Charlotte described HBS: 1


"Harry Benjamin Syndrome  (HBS) is an intersex condition developed in the very early stages of pregnancy affecting the physical process of differentiation between male and female. In this patients, the brain develops as a certain sex but the rest of the body takes on the physical characteristics of the opposite sex. Genetic aetiology for this condition had been showed also by modern medical research.

Today, what was  previously known as  intense True Transsexualism is  considered by medical res earch experts in this area as a physiological condition of birth, which is both neurological and genetic in origin, and therefore an inborn intersex condition (physiological).  That is  why by following the medical naming conventions in regard to physiologically intersexed states  or syndromes, the condition formerly known as intense True Transsexualism (Type VI on the diagnosis table of Harry Benjamin), must be named Harry Benjamin Syndrome.

Since people with Harry Benjamin Syndrome are conventional in their gender identity and expression, like most members of society, these people need a physical rehabilitation of their endocrine system and phenotype in order to function in society as any other average person.

They are not seeking to defy social norms of gender or sexuality as is the case of transgender and most who call themselves transsexuals .

Despite the confusion in terminology with the old concept of True "Transsexualism", persons with Harry Benjamin Syndrome (which in reality is a type of intersex condition) should not be confused with transgenderism and other ambiguous sexual states in general.

People with Harry Benjamin Syndrome repudiate sexual ambiguity and don't feel identified with sexually ambiguous labels like "transsexual"  or "transgender"  which neither define nor represent them."

Initially Goiar claimed that 1:500 are HBS, but has been reducing the frequency and on 2009 said  that HBS is "an extremely rare condition [1:100,000]" (which would mean that HBS persons are only a fraction of 1% of transsexuals). She is further contentious in that she and her movement have become known for disparaging other trans persons, even post-ops, and GLBT persons in general.

Despite Charlotte’s on-going non-surgical status, the Spanish HBS movement was critical of the UK and Spanish laws permitting gender change without surgery, and most well-known transsexual activists have been disparaged on her forum in that they are not anti-transgender (that is against all trans persons who are not HBS). Carla Antonelli was criticized for representing Spanish transsexuals despite being non-op – but Charlotte’s continuing pre-op status was not mentioned. Charlotte expressed approval of the situation for transsexuals in Iran. She objected to the term ‘transsexuality’, as opposed to 'transsexualism', as pejorative in that she took it to imply a choice.

Charlotte Goiar became a member of the Citizens Commission on Human Rights (CCHR), a Church of Scientology front organization that uses Thomas Szasz as a spokesman.  For several years she featured a 90 minute CCHR video on her HBS home page.  Further, Charlotte proclaimed that she was a licensed Human Rights Investigator:  this was only a CCHR bestowed title.

In 2008 Charlotte was assigned a court-appointed counsel, and with his help, induced a Vigo judge to recognize her problem, and rule that her "anxious-depressive syndrome" was caused by her discomfort with her body.  However the court ruled against her request for surgery in that such surgery was not available in Galicia.

Charlotte was antagonistic to the STP 2012 depathologization campaign by other transsexuals, and emphasized in contrast that HBS want medical repathologization. A petition sponsored by SHB-Info.org was signed by 500 persons and was sent to the World Health Organization asking that transsexualism be recognized, not as a psychological disorder, but as a medical one.

The HBS forum was discontinued and closed in 2011. 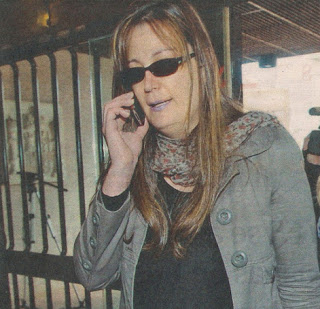 In 2012, her mother - the one person who had stood with her – died. Charlotte underwent a religious crisis:


“I had never imagined and I still do not understand what guilt I have of being born with this pathology, and the hatred that it awakens in so many people. I felt so vulnerable. … Through a Christian English friend, little by little I began to study some Christian texts. This was how, little by little, I found relief in God, as a way to leave the course of everything in the hands of a force superior to me, so I began to read the Bible for the first time shortly after turning 40 years old.”

She became a cristiana metodista (Methodist). 2

Charlotte won a ruling in the Galician High Court that Servizo Galego de Saúde (SERGAS), the Galician Health Service, should pay for her to have genital surgery.  However the Galician government appealed to the Spanish Supreme Court, which in turn also found in Goiar's favour in May 2013.  By September, as SERGAS had taken no steps to conform with the ruling, Goiar went to the press. SERGAS then wasted almost two years sending Charlotte to public clinics in Málaga and Barcelona that did not do the required type of operation. In 2015, at age 42, Charlotte finally had surgery in the private Instituto de Cirurxía Plástica, Barcelona, with Dr Iván Mañero - the only clinic in Spain to offer colovaginoplasty. Before the operation she asked for pastoral accompaniment, which led to her meeting Carlos Osma of Christianos Gays.

http://shb-info.org was taken down that year. 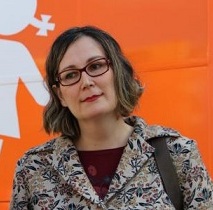 In 2017, Charlotte allied herself with the ultra-Catholic Hazte Oír and its opposition to sex education and to ‘gender ideology’. She is also claiming that the new ICD-11 term Gender Incongruence is the same thing as HBS.


According to the Spanish newspapers Charlotte at 41, despite being on female hormones since age 16 and legally female since the Ley de Identidad de Género in 2007, still has no work experience. Surgery will of course make her feel more confident, and the legal precedent she has set does far more good than all the HBS stuff, but as any cis woman would tell her, being a 40+ woman with neither job nor life partner is not an easy road.


What would the actual Harry Benjamin have thought of the HBS movement? He writes with regret of intolerance: “Too man 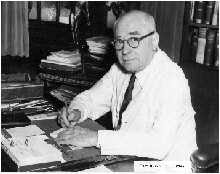 y individuals are that way; what they do not like must be forbidden and punished. Then they are satisfied. I have even met transvestites who dislike (or pretend to dislike) transsexualism so much that they are against estrogen treatment and operation (for reasons of self protection?). There are also transsexuals who dislike transvestites as well as homosexuals. Intolerance can be found in strange quarters.” The Transsexual Phenomenon, p114-5 of the Warner Books 1977 edition.
Surely, those who organize in his name, should respect his sentiment.