Thierry was born in Martinique. His father returned to France, abandoning his son and the boy's mother. When he was 10, his behaviour was erratic, and his father agreed to take him to avoid paying alimony. 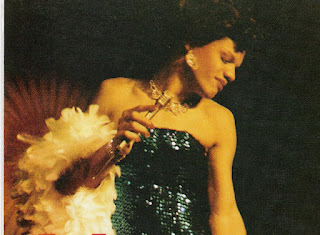 At school in Toulouse and later in the French Army parachute troop, he was rejected because of his skin colour. His army career ended wh

en he was convicted of robbing a female grocer.

He became a drag performer at the Paris nightclub, Paradis Latin, where he impersonated Eartha Kitt. He met his lover Jean-Thierry Mathurin, from French Guyana, at the nightclub.

Sometimes with his lover, from 1984-1987 Paulin murdered at least 20 elderly women for small amounts of money. Though he was captured, Paulin died of AIDS-related complications before going to trial.

His partner, Jean-Thierry (right), served a life sentence, and was released in 2009.
Paulin is referred to as the ‘Beast of Montmartre’, and his story was filmed as J'ai pas sommeil.