roshow (1939 -  2017) Drag Name: Flawless Sabrina. Drag performer and organizer of pageants from Philadelphia. Through his company, The Nationals Academy, Jack organized 46 pageants a year from 1959-1967. As local laws almost always prohibited cross-dressing, he would meet with officials and propose a charitable donation, and in return the town would pass a variance to permit the pageant. Usually the town officials did not understand that local people would be performing. The 1967 finals held in New York was a much bigger affair. The Muscular Dystrophy Association was announced as the charity, and Lady Bird Johnson, the President’s wife, and Robert Kennedy were initially co-sponsors, but quickly dropped out as the nature of the event became clearer.

The event was filmed as The Queen, 1968, which was a sensation at the Cannes International Film Festival. On this basis Jack was hired as special advisor on Midnight Cowboy, 1969, and Myra Breckinridge, 1970. He played a gay mufti part in the thriller, The Anderson Tapes, 1971.

The 2002 short film, Between Two Worlds, is mainly about him, and he appears in the 2008 documentary about the transgender rock singer, Lisa Jackson.

Rachel Harlow (1948 - ). Born Richard Finocchio in Philadelphia, aka Rachel Billeboult. In 1967 Rachel was a very passable female impersonator, described as a 'natural wonder’, who always won the drag contests she entered, and she became briefly famous in the film, The Queen, 1968.

The contestants are shown chatting in their hotel rooms, discussing how they were not called in the draft, their boyfriends, why they would never have a sex change. Richard throws a fit because he does not have a suitable

wig (although her own hair is quite feminine enough). The film includes shots of only Richard (as male as he gets) arriving and departing, and Richard, as Harlow on stage, gets longer and better-lit close-ups than the other contestants. She went to Cannes International Film Festival with the film and was a center of attention. David Bowie, in his androgynous phase, cited her influence.

She transitioned in 1972. In later years she was active running nights clubs, including Harlow’s at 22nd and Market, and in local television in Philadelphia.

For a long while that was all the public knowledge about Rachel. Then Wendy Leigh published her biography of Grace Kelly, and included two pages on Rachel, who had an affair with John B. Kelly, the brother of Grace, who would have married her if his mother had not threatened to disinherit him.


Crystal Labeija (? - ? ). Crystal was the other standout among the contestants in The 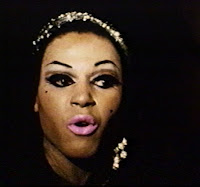 Queen, under the title, Miss Manhattan. She threw a tantrum at the end after losing to Rachel Harlow.

She was the founder of the New York House of LaBeija in 1972, which in turn inspired others to declare Houses, sometimes named after themselves – e.g House of Corey after Dorian Corey, sometimes named after established fashion houses such as Chanel or St Laurent. Crystal Labeija is discussed, but does not appear in the 1990 film, Paris is Burning.

The young Billy Schumacher, who will later become the famous International Chrysis, and the young Kim Christy are in the chorus line, but are not identified.
----------------

(note: Rachel is listed under her male name.   This is still the case in IMDB.)