William Nelson was born in Ohio. In the late 1980s, he was an out-of-work math instructor in Colorado when he built an electronic machine, which he called the EPFX 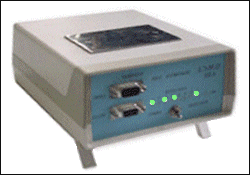 (Electro-Physio-Feedback-Xrroid System), which he said would diagnose and eliminate all diseases from Aids to cancer. The US Food and Drug Administration indicted him on felony fraud charges in 1996, and he relocated to Budapest and continues to sell his machine world-wide including in the US for up to $55,000 each.

By Desiré’s own account, 18-year-old Bill Nelson was on the Apollo 13 engineering team and on his own rescued the return to Earth; was an alternate member of the 1986 US Olympics gymnastics team; and later was nominated for a Nobel Prize in medicine. She claims that William has eight doctorates. Desiré’s web site describes herself as “easily by far the most colorful, interesting, intelligent and courageous person in the world today”. She also says “Bill recognizes that he is the Maitreya predicted in Buddhist legend”. 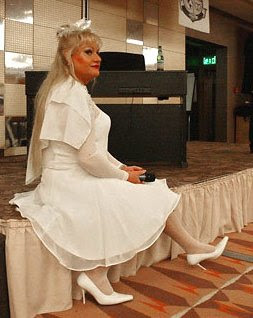 William had two wives and two children. Both wives left him when he revealed that he was a transvestite. However he claims that his medical for his immigration to Hungary revealed that he also has ovaries.

His current Hungarian wife of 10 years is accepting of his female side, and in 2002 William became Desiré Dubounet. She regularly performs with her band, Hunz, at conventions for fans of her machines and in her own club. He also makes films at a Budapest studio, and is a activist for LGBT rights in Hungary.

*Not the country singer, Willie Nelson. 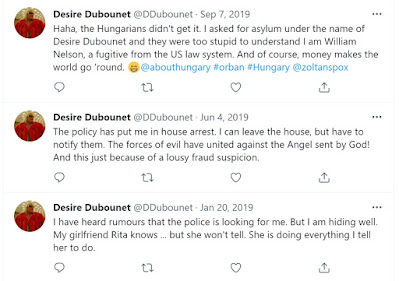 This is an interesting test case re the issue of how one should balance journalism against the person's own website.

Note the sympathetic article by Katrina Fox. This is the same Katrina Fox who is spouse to Tracie O'Keefe and co-editor of Finding the Real Me: True Tales of Sex & Gender Diversity, 2003.

Neat name for the English-language Hungarian magazine published in the city of Pest.