David Christian Lloyd-Gibbon grew up in Herefordshire and was educated at a minor public school. He ran away to London as a teenager, and instantly tricked at Victoria Station.

He won a talent contest as a female impersonator at the Elephant and Castle pub, and was hired to work there.

By the early Thatcher years she was a flamboyant prostitute in , using the name Vicky de Lambray. She was frequently mentioned in Fleet Street gossip columns and even headlines, because of court appearances, sex scandals and claims that she was a spy.

She would hire a Rolls Royce for soliciting and place a large sign in the back: VICKY de LAMBRAY-ENTERTAINER, and drive around central London or park outside the upscale Harrods Department Store. She would also work the upscale Shepherds Market area in Mayfair. She changed her name to Louis de Rothschild, hoping to be taken as a member of the family. The Rothschilds paid her £10,000 to change it back. She was convicted of art theft. 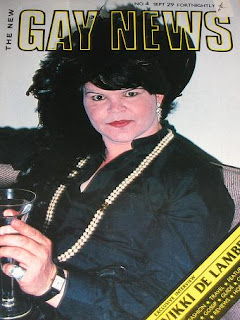 In 1983 she had a brief sexual encounter with Captain Anatoli Zotov, former Soviet Naval attaché, and a briefer one with Sir James Dunnett, a former head of MI6. Consequently she was investigated as a possible security risk.

When she went to trial for stealing Dunnet’s wallet she invented a persona named Caroline Clark who sold the inside stories to journalists. In 1986 she became a person of interest in the investigation into a series of homosexual murders when her name was found in a suspect’s address book.

In August 1986, she telephoned the Press Association and said: 'I have just been killed. I have been injected with a huge amount of heroin. I am desperate’. A few hours later she was found dead of a heroin overdose in her flat in Stockwell. The coroner returned an open verdict.

Email ThisBlogThis!Share to TwitterShare to FacebookShare to Pinterest
Labels: Men in Frocks, sex-worker