Capucine was a performer at Le Carrousel and was frequently mentioned along with Coccinelle and Bambi.


"Anyway, Capucine's heart was pierced by a conflict: the ancient sugar-daddy and luxury, or the young blades and penury?  Of course the luxury always won in the end because Capucine's keeper was a very famous millionaire, enabling Capsy to compete with and overtake Coxy's mink collection.  But unlike Coxy, Capsy wanted to be 'a lady' as well.  This put him into agonising quandries when he fell for a bricklayer or a road-digger (which was frequently, because Capsy couldn't resist the boue)."

In 1960, the same year as Bambi and April, Capucine went to Dr Burou clinic in Casablanca for surgical completion.

In 1961 she starred in the Amsterdam extension of Madame Arthur. In 1963 she was part of the first Le Carousel tour of Japan. She also performed at Le Boeuf sur le Toit in Paris.

Capucine is the French word for the nasturtium flower.

Unlike Coccinelle, Bambi and April Ashley, Capucine never published her autobiography. We don't even know where she came from. Is she Parisian? Nor, what happened to her after the mid 1960s. The Female Mimics article is mainly photographs with content-less text. There is an obvious comparison to Hans Crystal who was in also a star female impersonator at the 82 Club, had her surgical completion in the mid 1960s, and likewise disappeared from view. 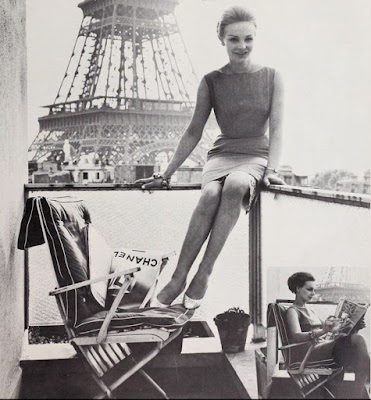 There is a confusing tradition among drag performers of taking the name of an established cis star. Germaine Lefebvre was an established French film star from the early 1950s using the name Capucine. Other drag performers to take an established name include Lynne Carter who took his name from the 1940s actress; Murry Pickford , was not Mary Pickford); Gloria Swanson (who was a big name in Chicago and New York drag circles in in 1920s, but not the Hollywood actress): Jean Malin who performed drag under the name of Imogene Wilson, one of the most famous of the Zeigfeld Follies showgirls otherwise known as Mary Nolan; Helen Morgan who used the name of the famous torch song singer; Brenda Lee the Brazilian activist who was not the country singer; and Bibíana Fernández, the transgender actress who used to be known as Bibí Andersen, only two letters away from the name of the Swedish actress Bibi Andersson.

Both IMDB and EN.Wikipedia claim that the Capucine in I don giovanni della Costa Azzurra (Beach Casanova) is the other Capucine, Germaine Lefebvre (1928 – 1990). This conflation went so far that after Lefebre took her life in 1990 by jumping from her eighth-floor Lausanne apartment, some actually said that she did so because she was transsexual.  !!!

For some reason, Capucine is not mentioned at all in April Ashley's second autobiography, The First Lady.
Time: 16:02