Vadillo was born and raised in Cuba. After emigration to Los Angeles she became Amara. After injections of hormones and silicone, she was a 34 DDD.

She found work acting in shemale videos and performing at the West Hollywood Club 7969 under the name of Sylvia Boots. She became known for her love of the work, and that it showed on camera. She acted in over 50 videos (see ES.Wikipedia for a list), and as she had facial cosmetic surgery several times, she looks different over the course of her films. 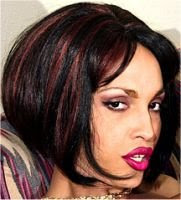 She generally got on well with her fellow actors, with one exception, fellow performer Tanya Amadore. After being attacked by three of Tanya's friends outside a nightclub, Amara filed a criminal complaint with the police. In August 2002, Amara dated Jorge Espinoza without knowing that he was Tanya's boyfriend. After sex he brutally beat her and stole her car. Again she filed a police complaint. Three weeks later Jorge returned and shot her in the head. Miraculously Amara survived and still has the bullet in her head. She filed a third police complaint and was unofficially advised to carry a gun for self-defense.

On March 17, 2003 Amara and Tanya encountered each other in the ladies room at the Yukon Mining Co restaurant. Insults, hair pulling and punches started and were continued in the parking lot, and friends of both women joined in. It escalated to the point where Amara pulled out her gun. Tanya tried to take it away from her. It went off and Tanya's hand was seared with gunpowder burns. A few minutes later it was apparent that one of Tanya's friends, Laura Banuelos, was dying of a gun wound. Amara was arrested.

In jail she was able to positively identify Jorge Espinoza to the police for his attempt on her life.

Amara herself was charged with Murder in the first degree, Murder in the second degree, Voluntary Manslaughter, Involuntary Manslaughter and an Armed Allegation charge. Tanya was not charged. After 14 months in jail, Amara's trial lasted one week, the defense rested after one day, Tanya "unequivocally testified" that she did not touch the trigger and that she had not encouraged Jorge Espinoza to shoot Amara.  The jury returned after five hours finding Amara guilty of second degree murder. She was convicted under the California law of transfer of intent that was intended to apply to a sniper situation.

58 people wrote letters and signed a petition urging the judge to reduce the sentence to Involuntary Manslaughter, but Amara was sentenced to 20 years to life for Second Degree Murder and an additional 25 years to life under the anti-sniping law, and that she has to pay $10,000 restitution to Laura's family if ever released on parole.

In January 2006 it was rumored that Tanya died after an incompetent injection of oil/silicone. Some think that this was a hoax to enable Tanya to escape police attention. In either case her video career was over.

An appeal of Amara's sentence in October 2007 was denied.

Amara was initially at Donovan State Prison in San Diego, and is currently in the California Medical Facility prison at Vacaville.

Neither Amara Vadillo nor Sylvia Boots is in IMDB nor the Wikipedia Category: Transsexual pornographic film actors.

45 years plus is longer than many mafia contract killers get.

The requirement to pay $10,000 is what in Sharia law is a called blood money, except that under Sharia, if you pay the money, you don’t go to jail.

The US gun lobby groups that proclaim that you should carry a gun to protect yourself don’t seem to be interested in this case.

Amara is mainly a female name, but sometimes given to boys.  It is unclear whether Vadillo was called Amara at birth, at emigration or later.  However she was charged under that name, so the California prosecution service took that to be her legal name.

The Wikibin article does not even mention the homicide.

Amara and Tanya put down each other and others as 'faggots'.   An indication of their lack of self-consciousness.
Time: 06:39