Maurice Wilson (1898 – 1934) was descended from wool-mill owners in Bradford, Yorkshire. In the Great War, he rose th 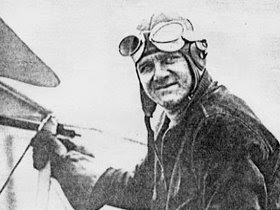 rough the ranks and became a Captain. He fought at Passchendaele, and won the Military Cross in an engagement near the village of Meteren. Later his left arm was permanently injured by machine gun fire.

After the War he worked on a sheep farm and then ran a ladies’ clothing shop in New Zealand for a while. On the boat home he met a group of yogis, and at home when he contracted tuberculosis he cured himself by fasting and prayer.

He decided to climb the then unconquered Mt Everest/Chomolungma. He had never climbed any mountain before. He bought an aeroplane to fly to India. He had never flown an aeroplane before. He took some lessons, crashed the plane only once and then flew to India with a simple map using the coastlines. The British Government of India impounded his aeroplane when he arrived.

He escaped and made his way though Tibet dressed as a monk. After a few failed attempts, his Sherpas refused to go on, and he continued alone, without extra oxygen. His body was found a year later and given a mountain funeral: he was tossed into a glacier. When his body was found, he was wearing female underwear, and the Chinese expedition of 1960 found a woman’s dress shoe. Mountaineering forums debate whether he died on the way up or on the way down - if the latter, he was the first European to climb the mountain, 19 years before Edmund Hillary.