Bentley was born in Trinida 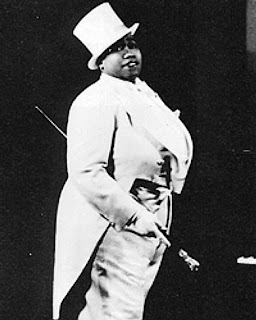 d and raised in Philadelphia by a US father and a Trinidadian mother.

She became a Blues singer, mainly famous in the 1930s when she performed by playing piano and singing naughty parodies of blues standards in a deep voice at gay speakeasies in New York. She normally dressed in men’s attire, usually a tuxedo and top hat, and flirted with women in the audience. She appeared at The Clam House on 133rd St and at Harlem’s Ubangi Club, where she was backed by a chorus of men in drag.

After prohibition, she moved to southern California, and was frequently harassed for wearing men’s clothing. She claimed that she had married a white woman in Atlantic City. During the repressive 1950s, she felt obliged 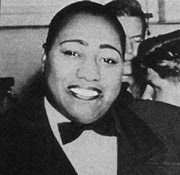 to wear dresses, pretended that she had married a man, and, in a fabricated article for Ebony magazine, claimed that female hormones had ‘cured’ her.

She was about to be ordained as a minister when she died of pneumonia at age 54.
Here is a clip of her with Groucho Marx on You Bet Your Life in the late 1950. http://video.google.ca/videosearch?rls=org.mozilla:en-US:official&um=1&q=gladys%20bentley&ie=UTF-8&sa=N&tab=wv
Time: 19:53