Junko, who is legally male and married to a woman, teaches Gender studies at Chuo U 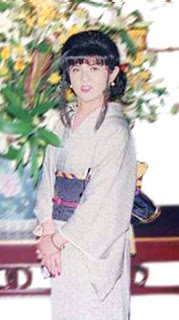 niversity, Tokyo, presenting as a woman.

He also teaches history at another Tokyo university as a man.

He is a regular contributor to Nyuhafu Kurabu magazine, and is frequently interviewed in the mainstream press and on television as a nyuhafu (new-half= transgender).