Was Hermann Göring a transvestite?

This article is about the Generalfeldmarschall of the Luftwaffe, who ranked second only to Adolf Hitler in Nazi Germany. Those interested in his general biography can read the Wikipedia entry here.

There is a rumour that Göring was a transvestite, and the question is raised in many sites on the web.

However there is very little substance to the rumour.

About the only biography that approaches the topic of transvestity is Goring: A Biography by David Irving, whose objectivity has been questioned given his association with right-wing causes and his suing for libel of historian Deborah Lipstadt. The judge in the case ruled that Irving "for his own ideological reasons persistently and deliberately misrepresented and manipulated historical evidence".

Irving has one and only one paragraph on the topic in his 846 page biography:


Nobody was celebrated with greater enthusiasm than
Göring. “Göring,” Herbert Backe, the level-headed deputy to
the minister of agriculture, told his wife after touring eastern
Germany with the general in mid-May, “arrived at Breslau 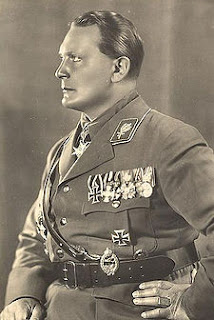 The cheers gave Göring the feeling of immortality: He was Germany -- he was the law. The increasingly odd, sometimes even effeminate garments (many of them designed for him by Carin) were a part of his public image. He was at heart almost a transvestite, certainly an exhibitionist. “Herbert,” Frau Backe wrote in her diary, “says that out in the Schorf Heath [around Carinhall] he always has a spear with him.” p193.

This is totally inadequate.

Bernd-Ulrich Hergemöller. Mann für Mann : biographisches Lexikon zur Geschichte von Freundesliebe und mannmännlicher Sexualität im deutschen Sprachraum. Hamburg: MännerschwarmSkript, 1998 is a biographical encyclopedia of German gays. It has no entry on Hermann Göring but mentions him several times. The only contribution that it offers is that Göring had a violet nightshirt!

Actor Jeff Chandler is taken to be a transvestite on the word of Esther Williams; and J. Edgar Hoover on the word of Susan Rosentiel. There is no such witness in the case of Göring.

The movies of course contribute to the rumour. The actor Volker Spengler who played Erwin/Elvira Weiskopf, the transsexual in Fassbinder's In Einem Jahr mit 13 Monden (In a Year of 13 Moons) 1978, then, eighteen years later, played Göring in Volker Schlöndorff's The Ogre, 1996. The 1988 television film, The Man Who Lived at the Ritz, based on A.E. Hotchner's novel featured Joss Ackland as a transvestite Göring.

So, certainly case not proven.

A more plausible assumption, noting that Göring did like to dress up but mainly in military uniforms and other male but ostentatious costumes, is that he was a homovestite. Homovestity, dressing up as one's own gender, was a concept not yet developed in the 1930s, and even today is generally not discussed. It is part of gender variance, but I am not spending much time on it in this blog because a) the research has not been done for me to use b) if the research were done, it would likely swamp the transgender activities which are after all our central focus.
Time: 11:57