Kenyon Carter was punished by his mom when he painted his fingernails at age 5, but 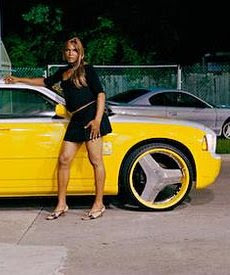 kept playing with dolls while his cousins played football.

In late teenage, as Katey she started performing at parties, and met a disc jockey from Take Fo’ Records. She was signed to capture the gay and female market. She released her first full album in 2000, and soon after started taking female hormones.

One would wish that the use of the word 'sissy' has a defiance as in our take back of the word 'queer'. However I am not finding this in the news articles.

Note the attitude in the Strauss article that if Katey is transgender, she is therefore homosexual!

Bounce was a music form specific to New Orleans, but apparently has moved out across the US south with the post-Katrina diaspora.

Note the penultimate paragraph in McDonnell's article: "Not everyone can come to terms with this new form of bounce rappers though. The rise of sissy rappers has led to people like seminal rap group Partners-N-Crime almost turning their back on the genre."