Luis Morales grew up in the South Bronx where she always felt that she was a girl. Her sister helped her with underwear and makeup.

She was selling crack at age 13. At 16 a squatter-house burned down with six deaths, and Morales was accused of starting the fire. On remand Morales was sent to Riker's Island jail. After she had been raped a couple of times, a member of the Almighty Latin King and Queen Nation gang offered her protection in exchange for regular sex. After two years on remand, a witness recanted, and Morales was released.

However the Latin Kings now regarded her as a neophyte member. She was ordered to report to a gang member in the Bronx:


“He knew I was a gender bender, and he was putting me through it. Then he forced me to be involved with him sexually. Nobody knew. But any time he wanted me to do something, I’d have to do it. I hated him.”

In her own time she dressed more and more as female, and spent time at Escuelita, a gay club in Manhattan.

1993 was a dramatic period of internal power struggle and murders within the Latin Kings that would lead to mass arrests.

A 13-year-old girl from Harlem, Ebony Williams, ran away from home again, but was found at her sister's in Coney Island, close to where Carlos Franco, also of the Latin Kings, lived. Ebony returned home, but then ran away again the same day, August 21. The night of the next day a slashed, battered and burning body of a teenage girl was found beneath a highway overpass in the Bronx. It would be two weeks before the body was identified as Ebony Williams. A police informer who was involved in the crime, named Luis Morales and Carlos Franco as the perpetrators.

There are two accounts of what happened. The first is by journalist Esther Haynes, whose account is the only detailed account available:


[Morales] "says someone from the gang paged her and told her to report immediately: 'I had to take off my makeup, pick up my van, and go clean up an apartment in the Bronx'. In her haste, she left her skirt on. 'When I got there, there was blood all over the floor. I don’t know if I was just stupid or I’d seen a lot of The A-Team, but I just started cutting off the bloody carpet and put it in plastic bags. The body was already in a box,' Synthia says. She claims that she and a few other jittery gang members then dropped the box off in a Bronx underpass and later set it on fire." Morales hid in the "trannie-friendly" Skyway motel in Jersey City for a few days, until her mother persuaded her to turn herself in.

The other account is the New York Daily News reporting on the trial:


"Morales, 22, and Franco, 24, appeared unmoved as Bronx Supreme Court Justice Martin Marcus sentenced them to 25 years to life for the 1993 slaying. Bronx Prosecutor William Hrabsky said the two held the girl captive in a Hunts Point apartment, Morales raping her and repeatedly slashing her body. Franco was charged with killing the girl after breaking her neck. 'The suffering that this poor child went through is beyond belief and puts this crime in the category of monstrous and barbarous,' Hrabsky said. Investigators said the men shoved Ebony's body into a box and dumped it on the Sheridan Expressway at E. 165th St., where it was set on fire. They later bragged about the crime to friends, many of whom testified against them."

However Morales was convicted of murder and manslaughter, but not of rape. She commented:


"They had to switch their story in the trial because how do you tell the jury that he had on a dress and then he was raping a girl? I’ve never had sex with a female in my life.”

She was sentenced to 25 years to life, and returned to Riker's Island, where she legally changed her name to Synthia China-Blast. As a female Synthia had sex with some of the most notorious murderers and rapists in the New York prison system. In 1999 she was put on low-level female hormones, which have given her small breasts. However she was refused the higher level dosage that some other prisoners are on in that she did not have an official prescription before incarceration. She is suing for medical treatment up to and including genital surgery. 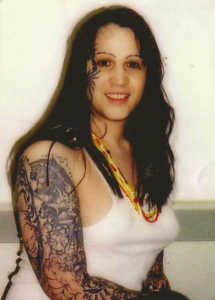 In 2002 Synthia was transferred to Attica Correctional Facility in upstate New York. The next year she attempted but failed to castrate herself, and then took up with the 35-year-old then virgin copycat serial killer Eddie Seda, and in effect became his wife. In 2004, after she was transferred to Wende Correctional Facility, she sent a letter to the New York Daily News as by the Zodiac Killer’s Wife, in which she said:


“If I was a real woman I could bring about little future serial killers to terrorize NYC like my husband did. How [New Yorkers] would of loathed the Zodiac Children”.

The murder of Ebony Williams is of course monstrous and barbarous.   However there is a possibility that a wrong person is being punished for it, which makes the crime even worse.

As with several accounts of inmates, we do not have all the facts.   The account in New York Magazine by Esther Haynes is the only one to go into details.

Gallus Mag, Laverne Cox and Parker Molloy all say that Synthia China-Blast was convicted of rape.   This is not correct.   She was convicted of murder and manslaughter, but not rape.   Her prison sex life has been in the female role, and she claims (plausibly) that she has never had sex with a woman.   I am inclined to accept this.

Synthia’s 2004 Zodiac Killer’s Wife letter was of course a stupid thing to do.

There was a third person at the murder, the police informer.   We really need to know about this person who would seem to be escaping his own guilt by blaming another.   We are told nothing about him except the simple fact of his existence.   Nor are we told anything about Carlos Franco, except his guilt.

The Wikipedia article on the Latin Kings tells us that from June 1993 to February 1994 there was an internal power struggle within the Latin Kings in New York.  7 Latin Kings were murdered, and afterwards the police were able to charge 20 major members with murder and racketeering.   Ebony Williams’ murder in August 1993 falls right within this period.    No journalist has bothered to explain if there is a connection.

If we go with the account by Esther Haynes, Morales was a bottom level functionary in the Latin Kings who did not dare to refuse an order.   Cleaning up after the murder makes Morales an accessory, and disposing of the body is also a crime.   However no motive was cited as to why Morales wanted to murder Ebony Williams, and the silence about just what the police informer actually did makes the conviction of Morales a very unsafe conviction.

Gallus Mag, Laverne Cox and Parker Molloy all have such faith in the patriarchal justice system that they do not consider that Synthia China-Blast may be a victim also.  Even the SRLP seems to consider her conviction a safe conviction, and are only concerned about the extra punishment of being 23 hours a day in solitary.

If Synthia China-Blast’s guilt is only that of being an accessory, and an accessory under duress at that, then her sentence is certainly excessive.

If Synthia China-Blast were in the UK, she would be in a women’s prison under the 2011 New Prison Guidelines.   If she is guilty only of being an accessory, then she is no danger in a women’s prison.   Even if she were guilty of the murder, there are equally violent women in women’s prisons, and the system is able to manage them.

Gallus Mag seems to be obsessed that a male-bodied person convicted of rape must not be allowed to have his/her penis and testosterone removed (=genital surgery).  See also Sandy-Jo Battista.   This is a very strange position.
Time: 20:34