Jerome Pollitt was a stage female impersonator under the name of Diane De Rougy. He took his femme name from a celebrated courtesan and actress Liane de Pougy.

In 1898, whilst appearing at the Cambridge Footlights club, he met and had an affair with the then unknown Aleister Crowley. Crowley describes his lover:


'Pollitt was rather plain than otherwise. His face was made tragic by the terrible hunger of the eyes and the bitter sadness of the mouth. He possessed one physical beauty - his hair. This was very plentiful and he wore it rather long. It was what is called a shock. But its colour was pale gold, like spring sunshine, and its texture was of the finest gossamer.' 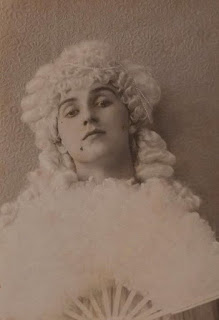 Crowley would later write that 'I lived with Pollitt as his wife for some six months and he made a poet out of me'.

Pollitt was also a friend of Aubrey Beardsley, and was painted by James Whistler. He was an art collector. He was the original of the 'Babe' in E.F. Benson's 'The Babe, B.A.'.

Crowley immortalized Pollitt in The Scented Garden of Abdullah the Satirist

- a collection of poems which are a blend of Persian mysticism and the glorification of homosexual love, written in the style of ghazals by an imaginary seventeenth-century poet, Abdullah El Haji, supposedly translated into English by an Anglo-Indian, Major Lutiy, and discussed by an equally imaginary Anglican clergyman. In the closing sections of the book, the name of Herbert Charles Jerome Pollitt is spelled out in the first letter of each line, to be followed (but in reverse order) by that of Aleister Crowley.

Crowley (1875 - 1947) says that Pollitt was ten years older, and this has been repeated in many places, but the age difference was actually only four years.
Time: 13:08