George was raised in Eltham, London by Irish parents.

As a participant in the New Romantic movement in the early 1980s he and his friend Marilyn (Peter Robinson) were noted for their androgynous dressing. Malcolm McLaren, who ha

d run the Sex Pistols, arranged for Boy George, as he became known, to perform with Bow Wow Wow.

Shortly after George and three others formed Culture Club. The group took off and had singles and albums at the top of the charts.

George’s dress style resulted in him being regarded as the most famous transvestite of the period, but he frequently insisted in interviews that he did not wear female underwear, and that he was proud to be a man, with no need to be a woman. He claimed that his dressing was more like that of a priest. In his 1995 biography, he said: "I wanted people to know I was gay. In many people's eyes, I was the premier poof, the benchmark by which others would be measured”, although in the 1980s he had avoided admitting to being gay and had famously said that he prefered a ‘nice cup of tea’ to sex.

He developed a serious heroin addiction. Bandmate Michael Rudetski died of a heroin overdose. George’s brother David attempted to save his life by talking about the addiction on national television. In 1986 George was ar 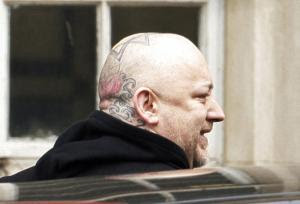 His solo career after Culture Club was less successful. For a while he wrote songs under the name Angela Dust. He had a new hit with “The Crying Game”, released with the film in 1992. He started DJing and was asked to mix compilation discs by Fantazia and Ministry of Sound. In 2002/3 he starred in the musical Taboo, based on his own life, but playing a different character. The show lasted for two years.

In 2005, in New York, he called the police over a robbery and was arrested for cocaine possession. He was sentenced to garbage duty for ‘wasting police time’.

I wasn't in London for New Romanticism, and never related to that phase of the rock-pop rainbow.

'Gender variance' is a wide term. That is why I chose it. Obviously George O'Dowd comes under the wide umbrella, even though his dressing up is only a phase that he passed through. However there is no rule that says that to be gender variant, you have to be so for life. I don't see O'Dowd as either a transvestite or a drag queen. He seems to be more of a theovestite (dressing (up) as a priest). Even in the '80s I was put off by his insistence that he wore male underwear under his frocks.

Some persons have complained that I included Rudy Guliani on this blog. Guliani is a lot closer to being transgender than O'Dowd is. And he does not go around insisting that he has male underwear under his skirts.