Brian Sullivan was born in New Jersey (although some accounts say that he was named Charlie Chase at birth). He was surgically re-assigned to female at 18 months, when doctors found a uterus and ovotestes. While Brian was what was then called a ‘true hermaphrodite’ (although some accounts specify different intersex conditions), the doctors told the parents that he was actually a girl. They excised her penis/clitoris, and her parents moved to another town and called the child Bonnie Sullivan. The child stopped speaking for six months.

They were advised to shield the child from her medical history. Bonnie frequently fel 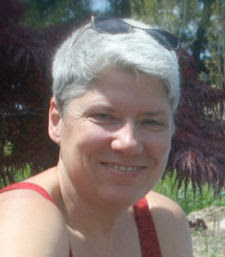 t different, but was never told why, although she found out about the clitoridectomy when she was 10. From the age of 19 she tried to access her medical records, and it took three years before she succeeded.

She did a degree in mathematics at Massachusetts Institute of Technology, and studied Japanese at Harvard. She then helped to found a technology company in Japan doing computer and translation work.

At age 35 she had a nervous breakdown and she flew to Florida and asked her mother a lot of questions. She then moved to San Francisco and started contacting anybody who might help. One such was Anne Fausto-Sterling who was about to publish her paper “The Five Sexes” in The Sciences. Sullivan wrote a letter which was published in the next issue (July/August 1993) asking persons with intersex conditions to contact ‘Cheryl Chase’ at the Intersex Society of North America (ISNA), which jump-started the organization.

She became quite critical of the standard of care for intersexed infants developed by Dr John Money, which proposed early corrective surgery and silence to the child so that he/she will not grow up questioning his/her sexual identity. As Cheryl Chase, Sullivan has been a major voice for the position that surgery on intersex children should not be done until the person is able to make an informed choice, that parents and doctors should be open with the child about the condition, and that parents should be ready if the child later opts for the other gender from that in which it was raised.

Chase has appeared in several documentaries on intersex. She changed her legal name to Bo Laurent in 1995. In 1998 she wrote an amicus brief for the Columbian constitutional court re proposed surgery on a six-year-old boy. In 2004 she persuaded the San Francisco Rights Commission to hold hearings on medical procedures for intersex children. She has published in medical journals, and has criticized feminist writers for ignoring surgery on intersex children while condemning female genital cutting. ISNA was honored with the International Gay and Lesbian Human Rights Commission's 2000 Felipa de Souza Human Rights Award.

However in later years she has worked more closely with doctors than with other intersex activists. In particular, she has worked closely with the non-intersex Alice Dreger, who became a major voice in ISNA. She co-authored a paper with Dreger advocating that ‘Intersex’ be replaced by ‘Disorders of Sex Development’ (DSD) – a position strongly criticized by other intersex activists as repathologization.

In 2004 Laurent married her wife of five years in San Francisco, when same-sex marriage was briefly permitted in California for the first time. They live on a hobby farm in Sonomo, California.

In 2008 ISNA was closed down with an anonymous statement, and Chase, who was now openly calling herself Bo Laurent, joined The Accord Alliance (founded by Katrina Karkazis, the author of Fixing Sex: Intersex, Medical Authority, and Lived Experience) which has anonymous funding through the Tides Center and a $305,000 grant from The California Endowment, a spin-off from Blue Cross insurance.

Also in 2008, Bo completed an MA in Organization Development that she had started at the Institute for Advanced Study of Human Sexuality in San Francisco and completed at Sonomo State University.

Confusion has arisen from Bo's practice of using both 'Cheryl Chase' and 'Bo Laurent', sometimes in the same publication. Remember the brouhaha when Wayne Dynes also used the name Evelyn Gittone in The Encyclopedia of Homosexuality. In Phyllis Burke's Gender Shock, 1996 (an otherwise well-researched book) Burke somehow managed to interview both Chase and Laurent without noticing that they were the same person.

The 'Cheryl Chase' Wikipedia page has a link at the bottom to a category called "American Intersex Activists'. When you click on it it turns out to be a set of one. There is no mention of Sherri Morris of the AIS Support Group, Hale Hawbecker who is developing a legal challenge to infant intersex surgeries or Curtis Hinkle, the founder of OII. These three are also missing from Stryker's book.
Time: 10:16