The glory years for Marcel Oudjman's Ouizman's clubs were 1945-1960, when Le Carrousel was located at 40, rue du Colisée, near the Champs-Elysée.


After 1945 Floridor and Marcel Ouizman converted the former Divan Japonais into a nightclub. They named it Madame Arthur after the song that Yvette Guilbert (who had recently died) had sung there. They were co-owners: the arrangement was a tontine, and when Floridor, who acted as host there, as he had at Binocle, died after a few months, Ouizman became the sole owner. 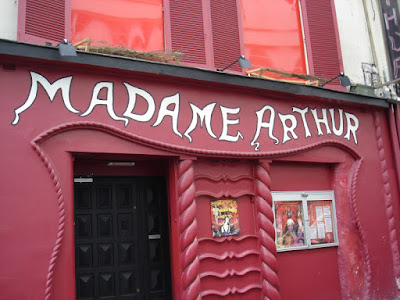 The clientele at the bar seemed to be gay, but it was otherwise in the salon. The show was so popular that it was put on five times from 23.00 till dawn. At this time the performers were 1930s style travestis who parodied women but did not openly identify as such, and arrived and left dressed as men.

The new host, Loulou, was a former priest who had abandoned his orders. He had an oratory in his apartment, and lived for 55 years with his lover, Hulla, who performed at the club. Loulou was also an award winning poet.

The first star was Maslova, a former ballet dancer, who at first performed under the name "Madame Arthur". He dominated the show for nearly 30 years. Other performers were Wanda Paris and Fifi Pervenche.

Ouizman was known at the club as Monsieur Marcel. He found a remarkable woman in Germaine Cartan.   ++Foester says that he cohabited with her, put her in charge at Madame Arthur, but they never formally married.  However they had three children, and other sources say that they were married.


"There was also the manager, Madame Germaine who, at that time, impressed me greatly. Tall, red-haired, still very bécébégé with strict tailoring and hair pulled back, I must admit it really did not look comfortable! In fact, it was only a facade, as I would discover later, when she invited me on several occasions to the sumptuous villa she and her husband owned in Sainte-Maxime. However, at Madame Arthur, she could be harsh, but in private, she proved simple, charming, generous." (Coccinelle par Coccinelle:51)

Encouraged by the success of Madame Arthur, Marcel took over Le Carrousel, in October 1947, and moved it to 40, rue du Colisée, near the Champs-Elysée, initially in the basement. The proximity to the Palais de L'Elysée was considered scandalous at the time. The decor was luxurious but intimate, and circular in the style of ancient theatres. Zambelli, Maxi and Mado were the initial stars.

An early visitor, in March 1948, was the US playwright Tennessee Williams who enthused about the 'most beautiful male whores' but ignored the travestis.

An association of neighbouring businesses initiated legal action and actually forced Le Carrousel to close, but M. Marcel was able to get around this, and when he re-opened in 1951, it was on the street floor.

It should be mentioned that the nightclub was not strictly legal. In 1907, Paris Prefect of Police Louis Lépine had signed an order prohibiting transvestism outside of the Sunday, Monday, Mardi Gras and Thursday of Mid-Lent except with special permanent permission, and banned drag shows at dances and places where alcohol is sold. However these rules were only intermittently enforced.

1947 – 1961 were the years of "Le Grande Carrousel", when the nightclub was one of the most expensive clubs in Paris. April Ashley described the club:


“Through the foyer, through the Long Bar, to the tables and chairs for about a hundred. The Interior was Parisian red plush and gilt, with a small stage and band at one end.” (Odyssey: 50)

There were 14 different shows, one each year, changed in January. They consisted of tableaux, and ended with a grand finale with singing and feathers. Micky Mercer was the token male impersonator. There were also intermissions when heterosexual dancing was encouraged.

In 1949, the Prefect of Police Roger Léonard signed an order that men were not allowed to dance with each other in public places. All contact between artists and the public was prohibited by the police: only special customers like Maria Callas, Josephine Baker and Marlene Dietrich had permission to go backstage to congratulate the artists.

In 1951 Coccinelle, aged 20, presented herself to Madame Germaine at Madame Arthur, and a year later she was a star at Le Carrousel. Press agentry spread the canard that Coccinelle was really a cis woman, which resulted in the rejoinder that "A woman as beautiful as Coccinelle can only be a man". Her looks were compared to those of Brigitte Bardot who was breaking into a film career at the same time.

Coccinelle was part of one of the earliest Carrousel tours – to the Casino de la Corniche, 9 km outside Algiers in 1952, where the future Bambi was in the audience. Just over a year later, Christmas 1953, Bambi debuted at Madame Arthur. 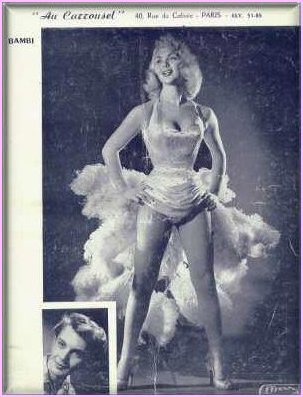 persona in the corner of the glamour photograph – even for Coccinelle and Bambi.

Coccinelle and Bambi were the first of a new type of performer, in that for them performance was a way to achieve womanhood, a womanhood that was continued offstage.

Similar performers began to arrive from other countries such as Pussy Katt (the first surgical transsexual in the US);  Aaicha Bergamin from Amsterdam who was known as Nanny; and the Tunisian Dominot who used her earnings to pay for studies at the Comedie Francaise.

It became the practice that performers either purchased or made their own costumes in that the club-supplied ones were not so good. Some boosted their income by having a sugar daddy or by earning a percentage when they took customers to other bars after hours.

Old-style performers, transformistes, still arrived – that is those who changed to male clothing off-stage and were not working towards a sex change. Even these performers were different from those of the 1930s, many of whom had done what the English called 'cod drag', that is exaggeration and playing for laughs. The new performers aimed for glamour.

One of the transformistes was Les Lee, who arrived from Quebec in 1954. He was later able to translate when artists arrived who did not speak French.

1954 was also the year that, under Police duress, Le Carrousel was closed for three months, and even Madame Arthur was banned from permitting 'men' wearing female clothes. This was following the French defeat by the Vietnamese at Dien Bien Phu, right-wing and anti-Semitic abuse aimed at and an attempted assassination of the new Jewish Prime Minister, Pierre Mendès France, and turmoil over the North African colonies.

Madame Germaine sent Bambi to star in a Le Carrousel tour of Algeria during the closure, and this time it was Nana in the audience. Nana, like Bambi, moved to Paris, and worked in cabaret, but never at Madame Arthur nor at Le Carrousel.

Poppy Cooper, who did not transition to womanhood until the 1970s, was one of the British performers who had been in soldiers-in-skirts revues after World War II which had run their course. Cooper found employment at Le Carrousel by the mid 1950s and was taken to be an old-style performer. She commented:


"There was more freedom there and you could go out onto the streets in drag if you wanted to, or go out with men to a restaurant after the show. …. French, Belgiums, Germans – they loved the travesti. The English seem different." (Kirk: 31)

Another such British performer was Dolly/Tommy Osborne who commented:


"I liked Paris, but I wasn't too happy in the show. I was a singer and I used to go out there and belt out the numbers big and loud and forget about being in drag, but most of the audience was there purely for the sensation of seeing boys with tits. The boys were all incredibly beautiful. But they just couldn't do anything, bless them." (Kirk: 31)


“The dressing-room was divided in half by a row of back-to-back dressing-tables. On one side were the stars like Coccinelle and Bambi and on the other the polloi: two rows of narcissists transported in mirrors. Fortunately for my savoir-faire as well as my amour-popre I was seated with the stars, who were to instruct me in the techniques of make-up and presentation.” (Odyssey: 53)

Only Coccinelle and Bambi addressed the patron as 'Marcel' rather than 'Monsieur Marcel' until Toni started doing so also.

In 1956 Coccinelle had found out about female hormones after meeting trans activist Marie André Schwidenhammer by chance on a train, and then in 1958 she was approached by Jenny, Dr Georges Burou's first transgender patient. Later that year Coccinelle also became a patient of Dr Burou.

Ouizman opened another Le Carrousel in Juan-les-Pins on the Côte d'Azur between Nice and Cannes. Toni and Bambi were to be seen in the best places on the Côte d'Azur so that people would say “It can't be true – surely they're girls" and then attend the show.

Over the next few years several of Monsieur Marcel's performers followed Coccinelle to Dr Burou's clinic in Casablanca, although Coccinelle was selective in whom she gave the details to.  Bambi, April Ashley, Amanda Lear and Capucine are the best known of those who went.

By the late 1950s there was already a gay bar in Osaka, Japan named Carrousel in homage to the Parisian nightclub. The performer Karūseru Maki named herself from the Osaka bar. (Karūseru = Carrousel)

In 1959 Salvador Dalí came and wanted to paint Toni in her half-way state, which she declined. He did become a long-term friend of Peki/Amanda.

The FR.Wikipedia article on Le Carrousel has no mention of Marcel Ouizman (under any spelling), nor of Madame Arthur as a nightclub, and of course no link to its own article on Le Divan du Monde.

Neither the EN.Wikipedia nor the FR.Wikipedia pages on Juan-les-Pins mention that Le Carrousel had a branch there.

The Casino de la Corniche is infamous in retrospect for the bombing on 9 June 1957 which killed the band leader, Lucien Seror, known as Lucky Starway, the heart-throb of the Bab el Oued. Eight or ten others were killed and eighty-five wounded, many with loss of limbs. This and the resulting pied noir ratonnade were major events in the second phase of the Battle of Algiers 1956-7.

1961 was not an easy year in Paris.  The Algerian Independence War was drawing to a close, and Algeria became independent in 1962.   A particularly savage event was the October Paris Massacre directed by police chief Maurice Papon.   A peaceful, but unauthorized, demonstration by Algerians was attacked by the police.  Some Algerians were beaten unconscious and then thrown into the river Seine to drown; others were killed within the courtyard of the Paris police headquarters.   The death toll is estimated as over 200.   Papon had earlier been active in deporting French Jews to German concentration camp during the occupation.   Also in 1961, Papon was personally awarded the Légion d'honneur by President Charles de Gaulle.

Bob Hope visited Le Carrousel de Paris.   In Juan-des-Pins he took Toni April out to breakfast.   However apparently he did not recognise her on the set of Road to Hong Kong, 1962.