Richard and Karen were teenage sweethearts who married just three months after highschool.

Richard Sharpe became a Boston-area dermatologist, with a cosmetic dermatology business, and a chain of hair removal clinics, LaseHair. He also taught at Harvard Medical School.

A secretive cross-dresser, who had abused his wife for many years, he came out in 2000 after he murdered her after she had left him. He had been self-prescribing female hormones to himself. He pleaded not guilty by reason of insanity, but was sentenced to life in prison without the possibility of parole. 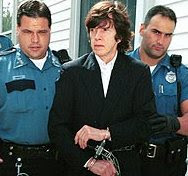 he prosecutor who had sent him to jail.


In January 2009 he managed to kill himself in his cell by hanging a sheet from the upper bunk.


*Not the soldier in the Bernard Cornwell novels and the subsequent Carlton Films television series, nor the rugby player, nor the 18th-century politician.