Benito Martin León grew up in Salta, in the northwest of Argentina. He was sexually abused by his father’s friend at age 4, and was sexually abused again at age 10-12. At 15 he was working as a prostitute. He was repeatedly imprisoned for his sex and gender orientation, and f 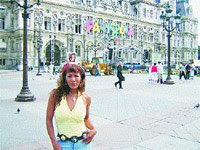 or not providing sexual services to police officers.

At 18 León had moved to Buenos Aires and was living as Monica. She was arrested, detained and physically and verbally abused for 24 hours for dressing as female. She was one of the first travestis to file a complaint at this standard police abuse.

At 19 tests showed that she was HIV+ and, against the policy of confidentiality, the hospital staff shouted out her results across the waiting room. She was a co-founder of Asociación Travestis Argentinas (ATA) in 1993, of Organización de Travestis de la Republica Argentina (OTRA) in 1994. In 1999 she left OTRA and joined Comunidad Homosexual Argentina (CHA), where she worked to solicit the Ombudsman’s Office for the right to change one’s name.

For six years her lover was Alberto, a policeman, but he frustrated her attempts to better herself by education, by getting into theatre or by becoming an activist for other travestis, so she ended the affair.

In 2003 she moved into the Gondolin Hotel which had been taken over by travestis from Salta after the owner died with no kin to inherit. Monica organized the Asociación Civil Gondolin, in large part to help the travestis there who were heavily into drugs and alcohol, and never used condoms. She coordinated with two hospitals to bring in 40-45 travestis monthly for check-ups to control tuberculosis. She sorted out the legal status of the hotel by getting the travestis to pay its taxes and bills.

On 18 December 2004, 60 police surrounded the hotel and robbed the inmates. Monica was shot eight times in the legs.

She fled to Paris and is seeking political asylum, but is harassed in that she does not have proper papers. In 2005 there was a media circus when Monica and Camille Barré, a post-operative trans woman, proposed to marry. This was Monica’s first affair with a woman. They were denounced by the French state for “trying to make society evolve by catching it in the traps of its own logic”.

*Not the jazz singer