Marcel Godbout was the youngest of seven children and a great-grand nephew of Adélard Godbout, who was Premier of Québec 1939-44 and gave Quebec women the right to vote. He grew up in Abitibi, Québec. He felt that she was a girl from a very early age, and was taunted at school, especially when he attempted to act masculine. 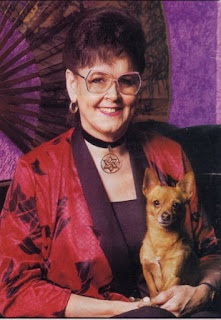 After school he worked in a hospital with the elderly. He confessed his desire to be a woman to a patient who had become a friend, but a nun overheard and the next day he was fired as a ‘sex maniac’.

At 18 Marcel moved to Montréal and became Marie-Marcelle. She became friends with the entertainer Lana St-Cyr (1927 - 1986) who helped her to become an comedian and magician under the name Mimi de Paris. This led to the playwright Michel Tremblay and a small part as a barmaid in his film Il était une fois dans l'est, 1974.

One day while working as a waitress, she was arrested and grouped with the prostitutes. On seeing her (male) id, the police accused her of being in disguise. While she had been on hormones since 1974, she found it tolerable to retain her penis, but the police accusation and the memory of an abused elderly gay man when she had worked with seniors persuaded her to look for an operation.

She met with sexologists in an experimental program at the Université de Québec à Montréal (UQAM), where students watched her through a one-way mirror. She had the operation in 1978 in Toronto with Dr Lindsay, for $3,000.

She had both male and female lovers, some not knowing of her past.

She founded L’Association des Transexuel(le)s du Québec in 1980, and later she was active in FiertéTrans.

In 1992 she worked with the Raëlian church to distribute condoms in Montreal Catholic high schools.

She has co-raised a son, Patrick, at the invitation of the boy’s father.