Raymond Gumieney was born in Brooklyn, New York, the last of eleven children, and 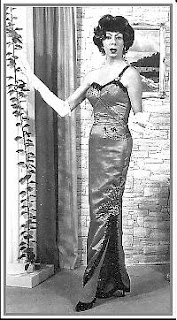 was raised by his mother alone. He sang and played French horn as a child.


In 1957 he talked himself in his first performing job. At first he was Ray Reynolds, but changed to Libby when hired as a a female impersonator at The Ace of Clubs where there was already another Ray. In 1959 he was hired by the Jewel Box Revue, but as a chorus boy.

Ray was working in mufti as a bar tender at Main Street Lounge in Greenwich Village when actor Raymond Burr (1917 - 1993), who played Perry Mason on television, came in and ended up spending the night with him. Ray sold the story to Confidential magazine, and the story now was that Burr had innocently picked up Libby and never realized that she was a ‘man’. The story included a composite photo of Burr and Libby.

In 1962 Libby was a singer at Finocchio’s in San Francisco, and then worked at the Jewel Box Lounge in Kansas City. He retired in 1997.