Ron grew up in a working-class home in Richmond, west London. He started as a child dancer, and he then toured in the popular all-male drag reviews during the Second World War. He met his lover, George, in 1947. 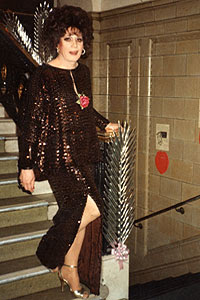 To avoid the repression that accompanied the Coronation in 1953, he lived in Tunisia for some years where he made a living as a stripper and singer.

On return to London he worked in risqué shows including the Gaiety Box Revue fronted by Larry Grayson. He was skilled at costume making, and made outfits for many London drag-acts. He was often en femme at private parties, and out on the town – at a time when such off-stage behaviour was unheard of among female impersonators.

Ron and George became known for their parties at their home in Putney in the early 1960s which attracted name guests such as the spy Kim Philby, lesbian singing star Dusty Springfield and the gangsters Ronnie and Reggie Kray. Legend has it that the Krays suggested what turned into the drag balls at Porchester Hall which Ron organized with Jean Fredericks. After Jean’s death he organized events at the Tudor Lodge in Bow.

In 1980 Ron opened a nightclub, Club Travestie Extraordinaire, in Stepney. This became an east-end institution, attracting both gay and straight transies, and as it lasted into the 21st century is arguably the UK’s longest lasting gay night spot. George died in 1981. Ron was an organizer and judge at the ‘Night of a Thousand Frocks’ in 1986 that evolved into the Alternate Miss London contest.

Ron continued at the club, always fabulously dressed, until he was taken ill in summer 2000. He died of liver cancer, age 74. The Alternate Miss London contest is now dedicated to him.