Cindy grew up in Samoa in a Seventh Day Adventist family, and became a fa’afafine, the traditional transgender role in Samoa. Like many modern fa’afafines, Cindy has adopt

ed western morés and is much like a drag queen, although she lives as female, and is disapproved of by the elders for this reason.

By the age of 15 she was the first night-club female vocalist in Samoa. She had an affair with a member of the Australian High Commission, who was transferred back home, but he quit his job and returned to Samoa to be with her.

In 1989 Cindy toured New Zealand, was a great success and stayed until 1996 when she 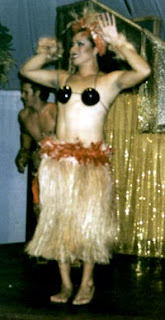 returned to Samoa and started her own cabaret show that became a must for every tourist. She was also crowned Miss My Girl and Miss South Pacific Beauty Queen.

In 1999 she went to the USA for a one-off show in Carson City, but the trip was expanded as a tour. In 2002 she won Sydney’s Poly Talent Quest. She specializes in impersonations of Tina Turner.

I hope that no-one is still reading Margaret Mead on Samoa. She never learned the language, couldn't tell when when people where having her on, and never noticed the fa'afafines.