In 1974 Elizabeth Carmichael, 6"1' (1.85 m) and 225 lb (102 kg), a feisty widow with five children, and a small staff in Los Angeles, announced to the world that they were selling an economical three-wheeled car called the Dale. She got booked on nationwide talk shows. Money

rolled in: for dealerships, for shares, as downpayments on the cars.


However there was not really a Dale. There was a wooden mockup with the same kind of engine that runs portable electric generators, and a lawn-mower carburetor. The district attorney from Los Angeles explains: 'The car would break after driving a few yards. I don't mean that it would quit running. I mean that it would break. Major stuff'.


With all this attention, 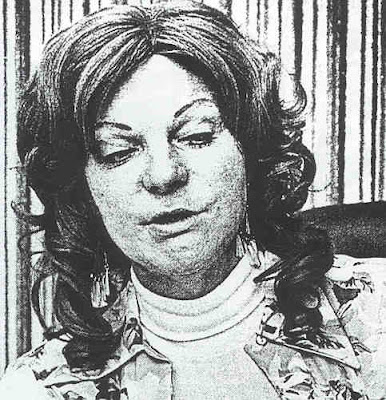 it took a further two months before it was realized that Ms Carmichael was also Jerry Dean Michael who had five children, and a wife, or at least no-one made the accusation publicly. A year later Ms Carmichael was found in Miami. Tried in Dallas, she was found guilty of grand theft. She explained her gender in that she had been undergoing sex-change operations for eight years.


She spent three years appealing the sentence in that she would not fit into either a men's or a women's prison. The appeals ran out in 1980. Carmichael never showed for sentencing. In 1989 she was identified after being featured on television. She was living near the town of Dale (same as the car) in Texas. Note that Carmichael is Michael (her real name) with 'car' added.

She will be out of prison now. Could it be her who has been altering her Wikipedia articles?
Time: 12:03

Email ThisBlogThis!Share to TwitterShare to FacebookShare to Pinterest
Labels: crime

no, she isn't changing anything...she died in February of '04

One of the greatest fun stories of all time to come out of Los Angeles. What a hoot. I will always remember the "Dale".

Think what could have been? Henry Ford would have turned over in his grave. lol

What was her daughters name?

@VjMcNeal do you want all of their names? Candi Wendi and Shawn (my mom)

Would you be available for a quick chat? I'm working on a project and would love to speak to you.

You can reach me micah @ largemediainc.com without the spaces obviously.

Thanks so much, I really hope to hear from you!

A documentary has been made about her called 'The Rose Lady' that is supposed to come out later this year.

Her daughters names are Candy, Wendy and Shawn. Her oldest child was Brain and her youngest child was Michael.

The documentary probably won't be available until 2018. For those that are curious and interested in her life there is much more than just The Dale. I hope you will watch the documentary to gain more insight into her life once it's available.

Where can I find the documentary?

Did this documentary ever get released? I can't find much info on it via google.

It's a great documentary. How society viewed transgender people in the 70s is one of the most interesting (and depressing) aspects, but presents quite a juxtaposition with our current views. Oh, and she was a scoundrel and megalomaniac, a scary combination.