Joe Rushton from Somerset joined the UK Army’s Royal Electrical and Mechanical Engineers in 1981. He became a Warrant Officer and then Company Sergeant Major, and was on the army boxing team. He served in Northern Ireland and in Bosnia and Kosova.

He was married four times to women, and had one son.

In 1997 he privately informed his commanding officer of his intention to become a woman. Shortly afterwards, when Rushton was handing over the company to another Sergeant Major, 22 soldiers arrived in drag. The commanding officer dismissed this as simply horseplay. 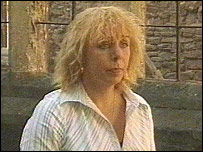 Rushton became a woman as Joanne in 1998, and was transferred to a desk job in training and recruitment, but the gender in her medical and administrative files was not changed. She was passed over for promotion, and some colleagues continued to refer to her as a man.

She was dismissed in March 2003 with long service and good conduct medals, but was disciplined on two occasions involving 'inappropriate language'. All this was in disregard of the guidelines/instructions AGAI 76 re transitions within the Army. Rushton unsuccessfully sued the Ministry of Defence for discrimination later that year.
EN.WIKIPEDIA