Brown was raised in Bagé, in Rio Grande Do Sul, Brazil.  His father was a military officer, and as a familial duty he did apply for military service, but was rejected.

The name ‘Yeda’ was picked in homage to Ieda Vargas, who was Miss Universe 1963, and also from Rio Grande Do Sul.

In 1967 Yeda moved to Rio de Janeiro and became a performer with Rogéria at the Teatro Rival. She was part of the show, Les Girls, and toured in Uruguay and Argentina. 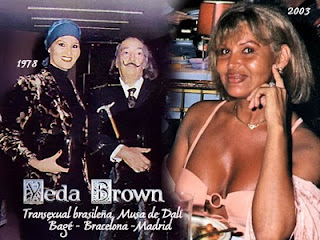 In 1974 she moved to Paris, and performed at Madame Arthur's and Le Carrousel. In 1975 she completed her transition with Dr Michel Seghers in Brussels, and her father paid for the surgery.

Afterwards she moved to Spain, where she was the first known surgically completed transsexual, and became famous on stage, screen and record. She had a small part in the ground-breaking El Transexual, 1977, that was partially inspired by the story of Lorena Capelli who died of peritonitis after an illegal sex change (the only kind in Spain at that time).

Yeda became known as El Cuerpo de Oro and Musa da Transição , and was taken up by Salvador Dali, who declared her to be his new muse. She partied with Boy George and David Bowie. Yeda returned to Brazil several times in the late 1990s to get her documentation changed. She lived in Barcelona, and then in Madrid.