Kenneth Tynan was raised in Birmingham and educated at King Edwards School, and Magdalen College, Oxford. He started smoking at grammar school; he stammered but gave an impression of high intelligence. In university debates he spoke out in favour of homosexuality, abortion and masturbation, a full generation before the first two were decriminalized in Britain. He had many admirers and his parties were sometimes attended by London celebrities. He also produced and acted in plays, and wrote for and edited college magazines. When his father, until then known as Peter Tynan, died in 1948, it came out that he was also Peter Peacock, a former mayor of Warrington, Cheshire, with another wife and another family. 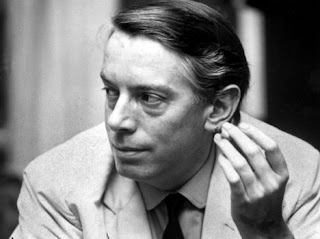 Kenneth married the US actor and future novelist Elaine Dundy in 1951. They had a daughter the next year, named her Tracy after Spencer Tracy and got Katherine Hepburn to be godmother. Also that year Kenneth was hired by the London Evening Standard as a theatre critic. The slogan on his desk was 'Rouse tempers, goad and lacerate, raise whirlwinds'. Two years later he moved to The Observer. He lambasted the middle-class country-house drama which dominated London theatre in the early 1950s, and championed the Angry Young Man movement. He is given credit for turning John Osborne's Look Back in Anger into a hit. He was the script editor at Ealing Studios, 1956-8. He also became known in the US with a series of reviews in The New Yorker, 1958-60.

Both Tynan and Dundy had extramarital affairs. Tynan favoured sadomasochism, especially caning buttocks. He had an affair with April Ashley's flatmate, and afterwards, April would mock the sound of his being spanked. In 1963 he became literary manager at the newly founded National Theatre, in those days located at the Old Vic, working with Lawrence Oliver whom he had previously disparaged. He ceased as The Observer theatre critic, but stayed on as its film critic. Dundy and Tynan finally divorced in 1964.

On 13 November 1965, on a BBC late-night satirical show, Tynan was asked about sexual intercourse on the stage and replied: “Well, I think so, certainly. I doubt if there are any rational people to whom the word 'fuck' would be particularly diabolical, revolting or totally forbidden. I think that anything which can be printed or said can also be seen." This was the first speaking of 'fuck' on British television. The BBC issued an apology, there were four separate censure motions in the House of Commons and Christian morality campaigner, Mary Whitehouse, wrote to the Queen that Tynan should have "his bottom spanked" (which of course he would have enjoyed). Billy Connolly later wrote a song about the event.

In 1967 Tynan pioneered the term 'homosexual mafia' (later 'gay mafia') as a proposed article for Playboy. Also that year he married the Canadian writer Kathleen Halton in 1967, when she was already pregnant with his child. They got Marlene Dietrich to come along as a witness. In 1969 Tynan created the stage show Oh! Calcutta! With sex and nudity (and Tony Blair's future father-in-law, Anthony Booth, in the cast), it became one of the longest running shows both in the West End and on Broadway. In 1971 he co-wrote Roman Polanski's Macbeth. Although he wrote elsewhere "No woman has ever distinguished herself [as lady MacBeth] for the simple reason that there is nothing feminine about her", this observation was not incorporated into the film. The same year he resumed keeping a diary which would eventually be published. He was forced out from the National Theatre in 1973.

As with his first wife, Tynan insisted on total sexual freedom for himself and fidelity from his wife. However Kathleen did go out with him when he was in drag. He caught, on television, the 1929 film, Pandora's Box by Georg Pabst and starring Louise Brooks, based on the play by Frank Wedekind. He dressed as Brooks for a party, and later set out to find the aging star, and did so in Rochester, New York, where they drank, smoked and talked. Kathleen wrote a script about this infatuation of her husband, which was optioned by Martin Scorsese but never filmed.

He also found a woman who would play out his sadomasochist fantasies, and they frequently cross-dressed together. Here is an excerpt from his diaries:


"Went with K. (in the Garbo dress from 'As You Desire Me' which I had copied for her) to a '20's Ball, at which I wore a feathered blue lurex peignoir, sequinned knickers, suspender belt and black stockings and a wig modelled after the hairstyle of Louise Brooks. And a six inch ivory cigarette-holder. Introduced myself, to people who asked who I was meant to be, as Lord Baden-Powell. I also shaved my legs for the occasion. Although I wouldn't want to be a woman, I love the idea of making love to a woman while dressed as one; and I much prefer the feel of my own legs when they are hairless. This doesn't make me a transvestite; but it does mean that I enjoy exploring more sexual possibilities than those available to macho males in jeans and t-shirts. (I regard it as a gap in me that I've never been turned on by the sight, touch or thought of a man.) Sadly, the other guests were mostly rich bores. (20 May 1976)".

He died of pulmonary emphysema at age 53.

Of course, the name Oh! Calcutta! is derived from "O quel cul t'as!" French for "What an arse you have!".