Brian Parry served with the Australian forces in Vietnam. He qualified as a ship’s captain. 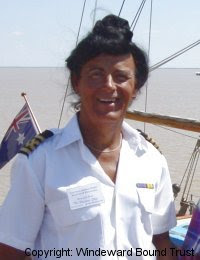 He had two marriages, and two children from the first marriage. He then met a new female partner who stayed with him during and after transition.

Brian was recognized as Hobart’s Citizen of the year in 1998 for his work building square riggers and involving local disadvantaged youth, but by then had transitioned to Sarah.

In 2002 Sarah captained the ship she had built to re-enact the Matthew Flinders 1802 Round Australia voyage, which produced the first detailed maps of Australia, and was featured on the Australian Story television show. The trip became controversial as crew jumped ship complaining about the facilities.


Sarah: "I tend to see myself as a third gender. I live as a woman. I'm known as a woman, legally I am. However I'm able to use all those things that I learned as a male & put them to good use in my life now. I don't reject my previous life”.

Sarah was still captaining the ship in November 2007 when it was in the news for rescuing a crayboat.

*Not the sociology lecturer.