Paul Monroe Grossman was born in Brooklyn, NY. He grew up in New Jersey,  graduated with an A.B. in 1941 from the University of Newark (now called Rutgers), and spent the Second World War in the U.S. Army.  He then went to Columbia University where he earned an M.A. and a Professional Diploma in Music Education (S.M.E.) in 1947. In 1949 he married Ruth Keshen, and he spent the next 21 years as a music teacher in public schools in North Dakota, Montana, upstate New York and in 1957 he finally returned to New Jersey to teach at Cedar Hill Elementary School in in the town of Basking Ridge (map). 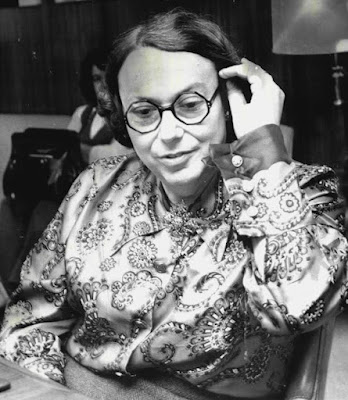 In 1971 Paul became Paula, and was suspended as a teacher. She sued, and lost. She fought the dismissal to the US Supreme Court, which refused to hear the case. However since she had been declared to be 'disabled', she eventually won a disability pension. She did stay in the same small town, and was well known as a transsexual. During the years of litigation, she became something of a celebrity, appeared on television, the guest of Johnny Carson and David Frost. She gave lectures all over the eastern United States. She supplemented her income playing as a musician in night clubs.

When it was over, she wrote A Handbook for Transsexuals, which is long out of print.

She was never allowed to teach in a school again. She stayed with her wife until she died in 2003.


Here is a summary of Paula's book:
Grossman's case against her employer, Grossman v. Bernards Township Board of Education, became caselaw in the US and is frequently cited result in transsexual employment law discussions. Drs Charles Ihlenfeld and Robert Laidlaw testified on behalf of Grossman, and Dr Charles Socarides on behalf of the schoolboard.  It was ruled that she was not discriminated against as a woman, and therefore the dismissal was legal.

In Janice Raymond's diatribe of hatred, The Transsexual Empire, there is a mention of Paula Grossman. She is quoted via a newspaper article gushing about having one's hair done, cosmetics and clothes. It is typical of Raymond's sloppy research that she did not find Paula's Book. This is probably just as well.

In 2007, one of her ex-pupils wrote a sympathetic article for the St Petersburg Times.

++In 2016,  Meryl Streep revealed that she had been one of Paula's students.