João and 16 brothers were born to a family of recently freed-slaves in the Nordeste region. João sold by his parents at age 7. 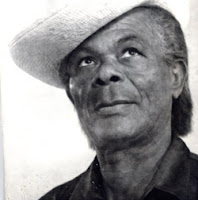 He moved to Lapa, Rio de Janeiro’s bohemian district, where he lived with a prostitute, an effeminate gay man and seven children. He started a show-biz career doing one-man drag shows at the Blue Danube basing his act on Josephine Baker, the black entertainer from St Louis who found success in Paris. 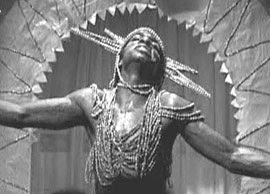 One night an abusive patron accosted him and the man ended up dead shot in the back. João Francisco was convicted of murder and served 10 years in prison. On release he won the Best Costume award at the 1942 Carnaval as Madame Satã, based on the character in Cecil DeMille’s Madam Satan, 1930 about a woman who wins back her husband by dressing as Satan as a woman for a party in a dirigible. From there he became a drag star using several personae including “The Negress of the Bulacoche”; “Saint Rita of the Coconut Tree”; “Jamacy, the Queen of the Forest”; “the Shark”; and “the Wild Pussycat”.

Offstage he was a butch gay man, a hustler, and known for his violent temper. In total he served 27 years in prison.