Tim knew from age six that he wanted to be a girl. He had little formal education but was self-educated by reading Marx and the 1950s existentialists. He was a beatnik, and an activist in the Campaign for Nuclear Disarmament (CND), and spent time in the existential and gay scene in Soho. He did drugs to suppress the idea that he might be transsexual.

In 1967 he consulted with the Maudsley Hospital in London and started taking female hormones. However he married a woman, they had two children and he stopped taking the hormones. By 1972 he had broken up with his wife and restarted on hormones. However he then married again, qualified for a Heavy Goods Vehicle (HGV) license, became a long-distance lorry driver, and had two more children.

When this marriage finished in 1978, he was prescribed hormones by his family doctor in King’s Lynn, and saw Dr Randall at Charing Cross Hospital and started transition as Rachael. Female long-distance lorry drivers were not permitted at that date. Rachael became an active feminist, and was a member of the Militant Tendency in the Labour Party. She moved to London and worked as a housing officer with the Borough of Southwark. She was in the Self Help Association for Transsexuals (SHAFT) for a while but did not get on with Judy Cousins who ran it.  Rachael was expelled for being too radical.

Rachael became notorious in the press in 1983 when she used a £2,000 loan, available to all council employees, to pay for her operation (others used it as a deposit for a mortgage). The same year she was part of the campaign to elect Peter Tatchell in Bermondsey which encountered homophobia from left, right and centre. Rachael was left with a feeling of ‘personal inauthenticity’ and for a while was a patient of existentialist psychiatrist R.D. Laing. In 1986 she was elected as a Labour member of the London borough council of Lambeth.

Rachael’s personal collection of material was one of the first donations towards Richard Ekins’ Trans-Gender Archives. She was featured in Hodgkinson’s Bodyshock, Jane Jackson’s film and wrote a paper for Ekins and King’s Blending Genders. In the first she is quoted:


“We transsexuals have nothing to gain from our attempts to gain legitimacy and respectability from the medical profession. We confuse ourselves and other people by trying to adopt a false identity, and pretending that we are real women (1987: 108)”.

In the third she emphasises that she is a Radical Feminist, a constructed woman, and endorses the views of Janice Raymond:


“My position is rooted in a basic acceptance of feminist arguments concerning the misogynist nature of society and in the belief that male transsexuals perpetuate misogyny when they indulge in a manipulative game of getting others to collude in their fantasy that they are women. ...

I never cease to wonder at the number of men who express some sort of dissatisfaction with their identities and roles as men. I believe this is always connected with envy of women, particularly an envy of their ability to procreate. I think it is imperative that such feelings are brought out into the open and recognised for what they are, so that we can deal with them in a constructive rather than destructive way. For this reason we must create an environment in which we can admit to our feelings, even if this leads us to reject sex reassignment procedures. ...

Without claiming to be the most convincing transsexual there is, I am able to say that those who do not know my history do assume that I am a woman, born as such. I still believe that there is a problem with this however. To what extent am I, and others like me, causing harm by indulging in my fantasy?”. 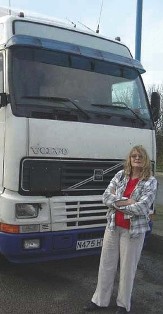 After eight years as a councillor, Rachael returned to continental lorry driving, and became an activist in the Transport and General Workers Union (TGWU). She was a delegate to the lorry drivers regional trade group, a member of the regional women’s committee, the regional LGBT working party, delegate to the two Labour Party conferences and the union’s delegate conference. She fought for equal wages and conditions for truck drivers across the EU. She was the TGWU delegate to the ITF conference for women transport workers in London in September 2005.

At age 66 she semi-retired and merely worked part-time.

The two Ekins references refer to Terri Webb, formerly Rachael.  Presumably she changed her mind and went back to Rachael.

Maggie Fiona Fox published an email from Rachael on her blog, which is valuable.  However Maggie then published a rant in February this year on TS-SI, attempting to posthumously convert Rachael into an HBS/CT activist.  It should be apparent from her life and writings that she was nothing of that sort.