Peter Ackroyd was raised in East Acton, London, by a single mother who worked in personnel. He knew that he was gay at age seven. He was educated at St Benedict’s public school, Ealing and Clare College, Cambridge which he left with a double first in English. In 1972 he was a Mellon Fellow at Yale University.

His early publications were of poetry. When he was employed at The Spectator, he contacted his publisher to change the pronouns in his poems from ‘he’ to ‘she’. He worked at The Spectator magazine from 1973, and became joint managing editor in 1978. He published his first non-poetry book in 1976, and has since published many acclaimed fiction and non-fiction works, mainly connected with London.

The only time, other than Yale, that he has lived outside London, was when he lived in the West Country with his lover Brian Kuhn. When Brian died, in 1994, he moved back to London.

He never uses the underground.

He was nominated to the Royal Society of Literature in 1984, and awarded a CBE in 20 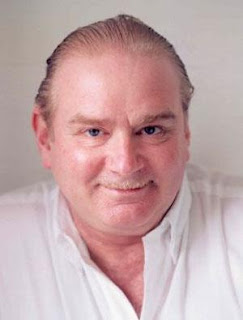 03. He is chief book reviewer for The Times, and regularly broadcasts on radio. He was number 79 (up from 86) on the Independent on Sunday Pink List 2009. He has written 15 novels (e.g. Hawksmoor

, 2000, Albion: The origins of the English Imagination

Early in his publishing career Ackroyd wrote a book, Dressing Up, on transvestity, that is usually skipped in later summaries of his output, although it is frequently listed in books on cross dressing.

David Sexton saw Dressing Up as the “key to all Peter Ackroyd’s novels” in that it prefigures his preoccupation with shifting identities and masks.

Barry Lewis summarizes the book: “The transvestite is primarily an inverter of norms, someone who reverses the clichés of fashion and identity. The fetishism associated with the wearing of women’s clothes by a male, or the wearing of men’s clothes by a female, reveals something about the fluidity of gender roles and the futility of rigid rules. … In the primitive phases of many cultures, transvestism often performs a sacred function as the mark of nature’s own androgyny. … Thus the concept of ‘dressing up’ acquires for Ackroyd an aesthetic dimension that exceeds mere transves 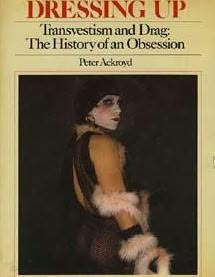 tism and embraces the importance of impersonation and pastiche.”

Ackroyd describes himself as an outsider to the subject (p34), but as a writer with a known penchant for masks, can we take this at face value?

He surveys transvestites in the arts and the opinions of various psychoanalysts. He always writes ‘trans-sexual’, but has little interest in them as opposed to transvestites. He makes the eminently sensible comment: “Some transvestites are exclusively fetishistic; they dress, in other words, to obtain some kind of sexual arousal. Psychoanalysts believe this to be the dominant mode of transvestism and, indeed, many transvestites remain fixed at this stage, assuaging their obsessions by frequent or intermittent cross-dressing. But there are other transvestites who move out of the fetishistic stage; they cease to be sexually excited by the act of cross-dressing itself, and go on to a more comprehensive form of feminine ‘passing’.” While on p14 he had gone along with the common assumption that gays do drag and heterosexuals are transvestites, on p24 he comments: “it is certainly the case that homosexual transvestites are the most misunderstood and neglected of all”. Of transvestites themselves he says that 'they themselves are not forthcoming about the nature of their obsession: most of them have no interest in discussing or explaining the nature or context of their activities' (p21). He finds them rather pathetic: 'Most transvestites locate their obsession in their infancy, as an unmanageable and threatening "disease" which haunted and often ruined their youth.' ... 'Most of them would abandon it if they were able to' ... 'Even those men who have been cross-dressing for a number of years still find the phenomenon to be both threatening and divisive'. He writes (p107) "Coccinelle, the male cabaret artiste” and nothing else about her, totally ignoring her transition. He repeats the unreliable tales about Edward Hyde and Charlotte d’Eon de Beaumont.

The book is richly illustrated, and that is its major merit.

In the 1980s virtually every book on trans whatever had both Janice Raymond and Peter Ackroyd in its bibliography.
Time: 16:18