As a teenager he won prizes for his costumes at the drag balls in Manhattan. After one win, still in drag, he wandered into a nearby cafeteria, and was attacked by four thugs, but was able to beat three of them unconscious.

By his late teens he was a chorus boy in Broadway shows, but he lost jobs because he was considered too effeminate. So he concentrated on performing in drag in Greenwich Village, under the name Imogene Wilson (he copied the name from Mary Nolan who used that name as a dancer in the Zeigfeld Follies). 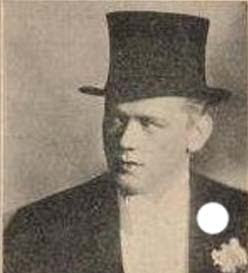 As he became more successful he mainly performed in a tuxedo as the emcee, in the swishy style, and is regarded as one of the originators of the Pansy Craze 1930-3. He was called a ‘male impersonator’ because of the clothes that he wore.

He appeared in small sissy parts in Hollywood films, and as a female impersonator in Arizona to Broadway, all in 1933.

He is known for his recording of ‘I'd rather be Spanish than Mannish’.

He died in a fluke accident. While parked on a pier, he confused the gears and reversed into the water. He was pinned under the steering wheel, but his passengers survived.

His wife was Lucille Helman who was later a notorious madam in Manhattan who was convicted in 1936 and 1942 of sending prostitutes across state lines.