Joseph was born in LaFayette, Louisiana, three months early. From the age of seven he was molested for several years by a male relative. At 10 he was gang-raped at a boys’ camp. In 1971 the family home burned down, and his parents divorced.

He started a relat 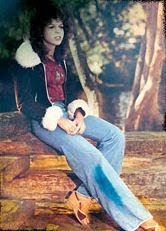 ionship with an older man, but was dumped. After high-school he moved to New Orleans, became Joanna, performed in a nightclub and did sex work. She also did lots of drugs and drink.

In 1975 Joanna moved to San Francisco, and started taking counseling. She had breast implants, and in 1979 had genital surgery from Dr Biber. Joanna met and married a loving Jewish man, but cheated on him, and then asked for a divorce. Her next fiancé dropped her when he discovered her past.

She returned to LaFayette in 1986. One evening, while drunk, she crashed her car and almost killed her passengers. In 1988 she married a single father of two children. They moved to Marietta, Georgia, and she became a Christian wife and mother, and stayed off drugs and alcohol.

She embraced her Christian beliefs more deeply, and by 1994 had concluded that she was outside God’s will. She shared her conclusion with her husband, and they separated.

She returned to Louisiana as a woman, but not until 1997 did she participate in Crosso

ver, the ex-transgender group. Eighteen months later she did a 40-day fast, and then in January 1999 returned to being Joseph.

Joseph had his breast implants removed. He is now a pastor with Crossover and with Exodus, and is a star feature on the Exodus Gender Identity page, where he explains: “Satan’s stronghold on my life was such that I could see no other course for my life than a complete sex change operation. I believed God had made a mistake and given me the physical attributes of a man, and I determined to set things ‘right’ ”.