Jean was born in Paris, the son of a prostitute, and raised by adoptive parents in the countryside. He was punished for misdemeanours by being in the Mettray Penal Colony for boys from 1926-9. 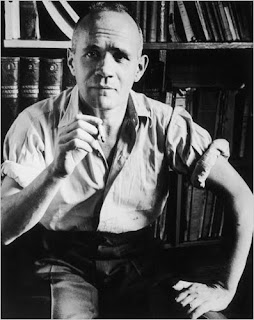 He left to join the Foreign Legion, from which he was discharged after being caught having sex with a man. He then lived as a thief, vagabond and prostitute, and went to prison several times.

In prison he wrote his first poem and the novel Notre Dame des Fleurs (Our Lady of the Flowers), 1942. He managed to introduce himself to Jean Cocteau, who used his contacts in German-occupied Paris to get Genet published, although only 30 copies were bound in 1943, and largely sold to rich collectors of erotica. Genet removed the more pornographic passages from the 1944 and 1948 L’Arbelete editions, and even more from the 1951 Gallimard edition.

The novel is a memory of Divine (taken by many to be the author’s alter), a transgender prostitute in Montmartre, Paris, who lives with her pimp who brings home a young hoodlum, Our Lady of the Flowers, who is eventually executed. Divine herself dies of tuberculosis.

The book was celebrated by Parisian intellectuals, and Jean-Paul Sartre, Hélène Cixous and Jacques Derrida wrote books about Genet and his novels.

Later in life Genet became a political activist speaking up for immigrants in France, and toured the US as a guest of the Black Panthers. He also spent six months in the Palestinian refugee camps, and he was later in Beirut during the massacres at Sabra and Shatila.

In his posthumous book, Un Captif amoureux (Prisoner of Love), he compares the joy of a transsexual having decided on the operation with the joy of suicide bomber who have decided to ‘cross over’.

Genet developed throat cancer at age 76, and died of a fall in his hotel room.