Georges Marie André Schwidenhammer was born into a rich industrial family in the Vosques. There were a few scandals before the war with regard to his crossdressing.

After studying physics and chemistry, he enlisted in the Army, where he attained the rank of captain.

Working with the Résistance in 1940, he helped several hundred prisoners-of-war escape the camp at Luneville. Then from late 1940 to 1943 he organized the production of a scouring powder, which employed a few dozen young people who would otherwise have been conscripted for compulsory labour in Germany. In 1943 he was arrested and sentenced to death by the Gestapo, and finally, interned at Natzweiler-Struthof concentration camp (in Alsace which had been incorporated into the Reich). There he was subjected to experimental hormonal treatment.

After 1945, he was forced to resign from the Army, and his internment was not recognized by the Military Pensions office.

Schwidenhammer now chose to live as female, using the name Marie André. She obtained diplomas in para-medical specialities and practiced as a masseuse therapist nurse, first in Paris hospitals and Monaco, then she moved to private practice, establishing a practice in the 17th arrondissement of Paris, where she worked until her death. She was in contact with most French transsexuals and transvestites. She also worked with Mme Bonnet who did waxing and electrolysis. 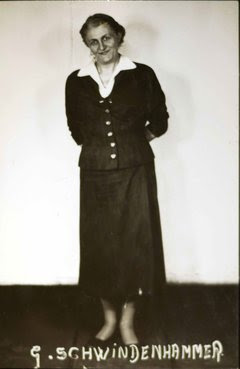 In the early 1950s, Marie André happened to meet Coccinelle by chance on a train, and informed her of hormones, and of the possibility of transition.

In 1963 Marie André was decorated with the cross for voluntary fighters in the Résistance.

In 1965 she founded AMAHO (l'Aide aux Malades Hormonaux), registered under the law of 1 July 1901 regarding voluntary associations. She proposed that transsexuals and transvestites were the result of growth hormones injected into calves and chickens which were then eaten by pregnant mothers.

She was for many years the transsexual spokesperson, frequently quoted in newspapers and books. She did not hesitate to approach government ministries on behalf of transsexuals. AMAHO issued membership cards that closely resembled the French National Identity Card. This was tolerated by the Prefecture of Police.

With a judgement in cassation in 1975, and and a ruling in the Court of Appeal of Reims, 1979, she was able to remove her first name ‘George’ from her identity papers. This became a precedent for all French citizens.

She became strident as was probably necessary for her work, but this did alienate some.

She died in a car accident. Her grave, very simple with her birth name only, is located near Chartres.

While rarely remembered outside France, she is of course a pioneer trans activist, who was working at the same time as Virginia Prince, José Sarria and Reed Erickson in the US and Della Aleksander and Charlotte Bach in the UK.

Both Doucé and Foerster express skepticism re the hormonal treatments in the concentration camp.  We have only Schwidenhammer’s own word for this having happened.
Time: 23:08