Moberly is a theologian and self-proclaimed psychoanalyst. She thinks that the primary cause of homosexuality is the failure of bonding with the same-sex parent, and that ho 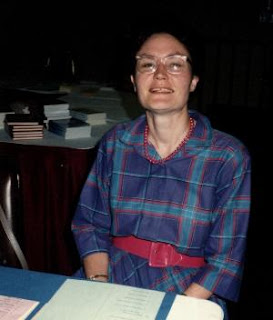 mosexuality is a reparative drive to repair this lack of affection. She advocates homosocial bonding instead. She implies that gay activists are basically dishonest.

She coined the term ‘reparative therapy’ to describe her therapeutic approach to restore one’s sense of gender identity. Where the failure of bonding is particularly severe, ‘a defensive detachment from the same sex implies disidentification: not just an absence of identification but a reaction against identification’. In other words, transsexuality is extreme homosexuality.
She was invited to speak at ex-gay conventions in the US in the movement that produced NARTH (National Association for Recovery and Treatment of Homosexuality).

Moberly's opinions continue to be endorsed in Christian circles as ‘scientific’.

I was unable to find a clear statement of what qualifications, if any, Moberly has. No writers claim that she has any qualifications in either psychology or psychoanalysis. The assumption is that she has a degree, a PhD even, in theology. Sometimes Cambridge is mentioned, sometimes Oxford. Or maybe she was a child in Cambridge.
Time: 10:26