José was born in San Francisco, the child of unmarried Columbian and Nicaraguan immigrants. He was raised by his mother and then by his godmother for whom his mother worked as a live-in domestic. They combined their households and moved to Redwood City during the Depression of the 1930s.

They both indulged his fondness for dressing in their clothes, and encouraged his singing. He took lessons from a retired opera singer. In addition to English and his native Spanish, he also learned French and German.

His first lover was Paul Kolish, an Austrian refugee whom he tutored. 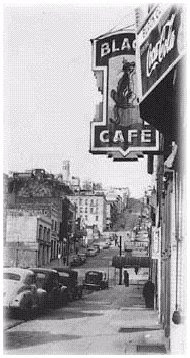 Sarria enlisted in the US Army during World War II, despite his short height, by seducing the major at the recruiting station. He was assigned to the Signals Corps. He was rejected for Intelligence for unstated reasons (probably for being fey), and was trained as a cook. He became a major’s orderly, and after the occupation of Berlin he managed an officers’ mess hall. He was discharged at the rank of Staff Sergeant.

Back in San Francisco Kolish was killed by a drunken driver on Christmas Day 1947. José enrolled in teacher training, but after being arrested for solicitation in a police sting in a hotel, he was now ineligible for certification as a teacher.

He found a lover, Jimmy Moore, who worked as a waiter and greeter at The Black Cat Bar, in San Francisco’s North Beach. José subbed for his lover at the bar. From there he started singing, moved onto the stage, and performed camp versions of operatic arias in drag. He continued performing until the bar closed in 1963. He would close the evening with a singing of “God save us Nelly Queens”.

In the 1950s, when cross-dressing was still illegal he distributed badges stating “I am a boy”, so that fellow drag queens could not be accused of “intent to deceive”. The police regularly raided gay bars and charged everyone found inside. José urged that they plead not guilty which overloaded the courts and judges started demanding 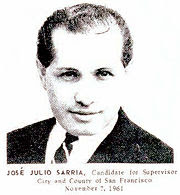 In 1961 he ran for the San Francisco Board of Supervisors, winning nearly 6,000 votes. This makes him the first openly transgender, and the first openly gay person to run for public office. His campaign helped later gay campaigns, in particular that of Harvey Milk.

He was a co-founder of the League for Civil Education (LCE) which provided educational programs and support for those caught in police raids; of the Society for Individual Rights (SIR) which organized both social and political events; and of the Tavern Guild, the first gay business association which helped co-ordinate bar owners against police harassment. 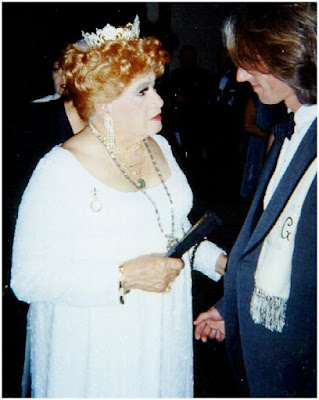 José was crowned Queen of the Beaux Arts Ball in 1964, and took the name the Widow Norton (a reference to Joshua Norton, the self-proclaimed Emperor of the United States in San Francisco,1859). This led to the founding of the Imperial Court System which now has chapters across North America and puts on balls and raises money for charity.

Also in 1964 José went into partnership with restaurateur Pierre Parker who held the French food concession for the World’s Fairs. They worked the fairs in New York, 1964, Montreal, 1967, San Antonio, 1968, and Spokane 1974. Then they both retired to Phoenix, Arizona.

José returned to San Francisco in 1977 to endorse Harvey Milk running for the Board of Supervisors.

Mama José and other of the Court appear in the opening of the 1995 film To Wong Foo, Thanks for Everything! Julie Newmar.

Sarria's lifetime of activism was commemorated when the city of San Francisco renamed a section of 16th Street in the Castro "José Sarria Court".

It seems to me that José Sarria parallells Virginia Prince. They were both active in the 1960s, one in each of the two major California cities, they were both persecuted by the prudish legal system, they both founded a system of social groups for transgender expression, neither became post-operative, both groups came to be seen as slightly embarrassing by more out transgenders of later generations. Both are still living.

Both Susan Stryker's Transgender History and Joanne Meyerowitz' How Sex Changed talk about Virginia Prince and are totally silent about José Sarria. Why is this? Is José Sarria not transgender enough? Are we discriminating on such a basis?

-------
A US company had a concession for French food at the World's Fairs! I wonder what the real French though about that. For some reason, all the World's Fairs 1964-74 were held in only two countries: the US and Canada.
Time: 17:47