Lou was a native of San Francisco. In the 1920s using the drag name of Sonia Pavlijev and street name of Bubbles, he passed as female on the streets. He performed as a chorus girl in product 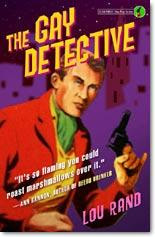 ions of The Desert Song and Varsity Drag.

He wrote a novel of gay love in 1932 under the name of Robert Scully. In 1964 he wrote the very first gay detective novel as Lou Rand – which includes glimpses of the San Francisco drag scene at the end of the 1950s.

As Toto le Grand he wrote a memoir spanning the 1920s – 1940s, and a gay cookbook. He was also a columnist for Gourmet Magazine.