Carolyn Gold was born in East Orange, New Jersey and educated at Wellesley College, Massachusetts. She married James Heilbrun and they had three children.

She studied English Literature at Columbia University, New York, earning a Ph.D in 1959. She then taught at Columbia until she retired. She was the first woman to receive tenure at Columbia. She also wrote 14 detective novels as Amanda Cross, initially in stealth mode until 1970 when a fan outed her after researching copyright records. 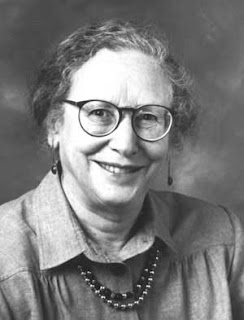 In 1973 Heilbrun published her Towards a Recognition of Androgyny, a text which on rereading today seems rather ordinary in its explanation that extremes of masculinity and femininity are unhealthy, and in providing examples from the literature of different periods of androgynous characters. She also uses 'androgynous' to describe novels where the female characters are as well drawn as the male ones.

As innocent as her observations were, they drew two waves of criticism. First from those who believed in society's genders and who reacted with outrage that they should be criticized. Secondly a group of feminists, predominantly Mary Daly and Adrienne Rich, criticized the concept of androgyny as inseparable from patriarchal assumptions. As early as the special androgyny issue of Women's Studies in 1974 , which also contained criticisms of androgyny as patriarchal, Heilbrun was wondering if she had defined or defended the concept with 'proper vigor'.

When she published Reinventing Womanhood

in 1979 she did not use the word androgyny and talked instead of autonomy. However by 1986 when she wrote the essay 'Gender and Detective Fiction' she had used 'androgyny' again, although she has never returned to the androgyny debate.

While she says in her last book, The Last Gift of Time, that she had envied men their clothes since young adulthood, it was not until she retired that she adopted trousers, shirts and flat shoes.

She committed suicide at age 77 when she felt that her life was complete.

When I first read Heilbrun's Towards a Recognition of Androgyny around 1980 I found it very disappointing. Like Bullough's books it promises an interesting topic but holds so much back. We had to wait until 1991 for Camille Paglia's Sexual Personae

for a book on androgyny in literature that delivered on the topic, but Paglia was already writing her PhD thesis"The Androgynous Dream: the image of the androgyne as it appears in literature and is embodied in the psyche of the artist, with reference to the visual arts and the cinema" in 1971. Paglia quite rightly panned Heilbrun's book in The Yale Review: "Heilbrun's book is so poorly researched that it may disgrace the subject in the eyes of serious scholars". And Paglia, unlike Heilbrun, was androgynous in her lifestyle as well as writing about it.

Heilbrun was obviously out of her depth when she came up against Daly and Co. It is as if she had been cossetted in her ivory tower and had not been exposed to the rough and tumble of feminist discourse. She wondered if she had defended the concept of androgyny with 'proper vigor'. Of course she had not. In the early 1970s there was a crying need for someone to champion the concept, but Paglia at that point was merely an unknown graduate student. Heilbrun, with tenure and a prestigious post at Columbia, was totally inadequate for the job. Daly and Co criticized transsexuals for not being androgynous, and also dismissed androgyny as patriarchal pseudo-wholeness. And, ironically, at the same time they were far more androgynous in their lifestyles than Heilbrun. There is a certain pre-post-modernist charm in the conventional wife and mother of three, in the conventional skirt and high-heels, trying to make her case without understanding what was then the new wave of feminism. A further irony is that Heilbrun was only two years older than Daly, but one feels as if she is of a previous generation.

One of the criticisms of the tenure system, which is supposed to guarantee freedom of expression, is that those who need it don't get it, and those who get it seem no longer to have anything radical to say. Heilbrun, who taught at the same university where she did her PhD, a special privilege, would exemplify this criticism.
Time: 22:38