w up with elder siblings Abraham and Rebecca, as well as his father Meyer, already successful as artists. By the time he entered an art academy at the age of twelve to prepare for the Royal Academy he was already producing remarkable drawings.

By his early twenties he was recognized for his unprecedented paintings, mainly on Old Testament subjects. He became friendly with the Pre-Raphaelite Edward Burne-Jones, and moved in the same circles as Algernon Swinburne, for whom he illustrated the flagellation novel The Flogging Block. Swinburne and Solomon are said to have romped naked around Danti Rossetti's home in Cheyne Walk. Solomon was also a friend of the young, also gay, Walter Pater, and he became the lover of Oscar Browning, a master at Eton and also a writer.

On 11 February 1873 he was arrested for cottaging in a public lavatory just off Oxford Street, along with a sixty-year-old stableman, George Roberts. They were charged "that they did unlawfully attempt feloniously to commit the abominable Crime of Buggery". Found guilty on 24 March, Roberts was sentenced to eighteen months hard labour (the same sentence that would be given to Oscar Wilde 20 years later), while Solomon, being of a different class, was obliged to pay a surety of £100 and walked away free. A year later he was arrested in France on a similar charge, with a nineteen-year-old. He was fined 16 francs and sentenced to three months in prison.

The Royal Academy and similar places were now out of bounds to him, and not being able to exhibit, found it very difficult to sell his painting. Friends continued to buy, but he declined into drink and poverty. In 1880 he arrived at a hospital ragged and actually without shoes. He ended his life in the St Giles in the Fields Workhouse, High Holborn. He died age 65 of heart failure aggravated by alcoholis 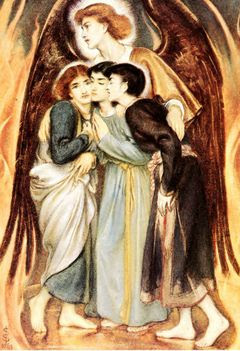 After this his works were again exhibited: 122 works were shown at a major commercial gallery in December 1905, and a year later at the Royal Academy.

As early as 1859 he had in his David Playing before Saul drawn the young harp player of ambiguous gender, in 1863 his Shadrach, Meshach and Abednego could be taken as girls, and in 1866 he had painted the transgender Heliogabalus, High Priest of the Sun, but androgynous themes did not dominate his paintings until after his arrest. Afterwards, almost in defiance, they did. This was his expression of his gender variance. Signifying perfection, sexual and spiritual, his androgynes drew on the speculations about androgynes in his Jewish upbringing, and the non-physical sexuality of his androgynes was a pure love in contrast to his real-life homosexuality which had brought him into the courts.

However his androgyne drawings were not viewed in a positive fashion. The poet and art critic, Arthur Symonds, discussing Solomon's reuse of the same face for Christ and the two Marys and for Sleep and Lust: "The lips are scarcely roughened to indicate a man, the throat 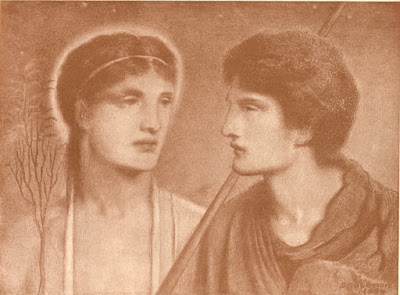 Not all gender variant person express their variance through clothing and the body. Some express it through their art or their writings.
Time: 11:48