George Wild Galvin was born where St Pancras Station now stands. His parents were impoverished entertainers, and he made hi 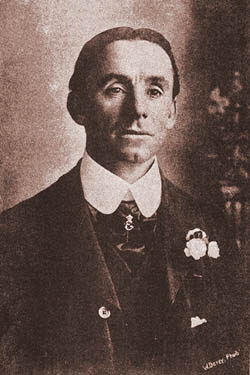 s first appearance at the age of four. His father died in 1864 at the age of 37, and two years later his mother married Will Leno the comedian, and they moved to Liverpool.

George never grew taller than 5’3”. In 1880 in Leeds he won a world championship belt for clog dancing, even though the competition was supposed to be rigged.

From 1888, using the name Dan Leno, he appeared annually in Pantomime, usually at Drury Lane Theatre, and usually in partnership with Herbert Campbell at a time when the Pantomime season continued until Easter. The rest of the year he appeared in Music Halls, never resting, performing up to 20 shows a night. He was the most famous comedian of his generation, and many regard him as the greatest Pantomime Dame of all time. His roles included: the Baroness in Babes in the Wood, the Queen of Hearts in Humpty Dumpty, Mrs Crusoe in Robinson Crusoe, the Widow Twanky in Alladin, and Dame Trot in Jack and the Beansta 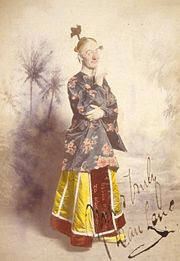 Typical of his patter was: 'My first husband, he was a Spaniard. He said he was a Spanish Count in his own country. He didn't count for much in this. ... He said that the olive complexion was the colour of the people in his country. I found out that it was dirt.'

In 1901 Dan was invited to give a special performance for the king at Sandringham. Etiquette being what it was, he felt obliged not to be en femme.

Between 1900 and 1902 he appeared in seven short comedy films, mainly as himself in Mufti. Only in Bluebeard, 1902, did he appear in a female role.

In 1903 he was admitted to a mental institution, although he did emerge to do a final Pantomime season in Humpty Dumpty.

He died in October 1904 of a brain tumour - at the age of 43. “General Paralysis of the Insane” was entered on his death certificate. His funeral was a public occasion.

He had been an active member of the entertainment charity, The Grand Order of Water Rats, and they still maintain his grave in Lambeth Cemetery.

It is said that his ghost still appears at Drury Lane Theatre.