Derrick Alexander, had an adventurous early life in South Africa, worked with the European National Movement, and was an officer in the National Reserve.  He was a teacher in Bermuda in 1969 and paid to resign as the effects of administered hormones became apparent.

Alexander  was a client, and then a friend of Charlotte Bach, the pioneering but idiosyncratic Hungarian non-op transsexual living in London who was made famous by another of Derrick's friends, the writer Colin Wilson.

Aleksander became a patient at Charing Cross Hospital and after a buccal smear, and EEG and several 10-15 minutes interviews was given a prescription for stilboestrol.


"What is so amusing and tragic is that female hormones are given to quieten the male libido, but something much more insidious happens.  The patient feels more female. Oestrogens essentially convert a transvestite into a transsexual.  If I hadn't been on hormone therapy I would never have dreamt of changing my sex." (Jacobson p19)

As Della Aleksander,  she had surgery in June 1970 from Dr Georges Burou in Casablanca.

She and her wife were several times guests at the home of Colin Wilson, and Wilson was pleased to learn from them, but in his book, The Misfits, he reduced her contribution to a slightly mentioned:  "a forty-four-year-old TV called Derrick Alexander", as mainly a sidekick of Charlotte Bach.

Della was the founder of GRAIL (Gender Research Association International Liaison), which campaigned for transsexual rights. 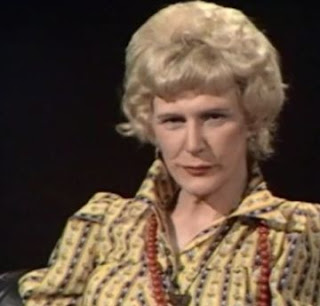 In 1973 she co-produced a BBC2 Open Door program on transsexuals which featured the Member of Parliament for Pontypool, Leo Abse, who had introduced the private member’s bill to decriminalize homosexuality that had become law in 1967.  (See embedded video below)

Della gave papers at the pioneering gender conferences at Leeds 1974, and Leicester 1975 (the latter was attended by the sociologist, Dave King, who would later write on transgender persons).  At Leeds she said:


"Being a transvestite or a transsexual cannot, by its nature, be a social protest phenomenon, for it seeks to conform to accepted norms of the sexual division and the manner in which the sexes are distinguished by dress. In this it is very conformist and not to be confused with unisex of the David Bowie genre with which it is frequently confused. Unisex mirrors Man’s sexual ambiguity. Transvestism and transsexualism does something about this ambiguity."


"Transsexualism is not, by itself, a viable life style, for it is a journey, and as such must have a destination. Though it is a truism that it is better to travel than to arrive, what makes it so is the knowledge of the certainty of arriving. To be robbed of that certainty would be to consign the traveller to a permanent limbo."

She also wrote a pamphlet on Theocratic Socialism, which she dedicated to Charlotte Bach.

*Not the first lesbian character in the BBC soap opera East Enders.