On her first page of this chapter Burns mentions Roberta Cowell in the first and third paragraphs. Which makes it all the more odd that in the second paragraph she writes: “Biographies about trans people were many years away. Conundrum, the first British mainstream trans autobiography by historian and writer Jan Morris, would not appear until 1974.” Equivocation around the word ‘mainstream’ is possible, but surely Roberta Cowell's Story, British Book Centre, 1954, caused enough of a sensation to be mainstream. Burns mentions the running of the story in the Picture Post, but not the release of the book.

Some other trans biographies and other writing by trans persons before 1974:


The only trans man before 1950 discussed by Burns is the Scottish Lord, Ewan Forbes. Micheal Dillon was the first surgical trans man, but he followed a distinguished line of trans men who had transitioned without medical help: among the rich and titled classes there was Forbes, Walter Sholto Douglas, Wynsley Michael Swan, Joe Carstairs, Toupie Lowther; among the professional classes James Barry, Victor Barker, Robert Allen, Jonathan Ferguson, John Thorp ; and among the workers Harry Stokes, William Holtom, Ernest Wood – not to mention the notorious Bill Allen (executed 1949). There is a brief mention of Robert Allen on p123 where a page of the FTM Newsletter is reproduced, but his biography is still not mentioned.

Burns spends three and a half pages on Virginia Prince and the Beaumont society (BS), but the Manchester TV/TS Group gets only one paragraph and the London TV/TS Group only one page. The leader of the London group, Yvonne Sinclair is dismissed as “a charismatic and opinionated cross-dresser” although she was once within 14 days of the operation. Trans women who turn back are also an important part of trans history. Why is Sinclair described as “opinionated’ while Prince is not? 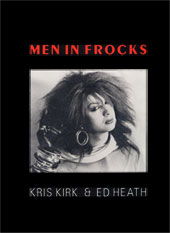 There is a photograph of the cover of Kris Kirk’s Men in Frocks, 1984 (admittedly not a good title at all) but no discussion of its contents other than to say “primarily concerned with the London drag scene”. Did Burns ever read it? See my review. Amongst other transsexual women it featured Poppy Cooper, Roz Kaveney, Letitia Winter/Fay Presto. I hope that Burns is not one of those who include heterosexual transvestites in the transgender umbrella, but exclude gay transvestites.

We have got to 1984 and two of the major trans groups of the early 1970s have not been mentioned, and in fact are mentioned nowhere in the book at all. The first group was the Gay Liberation Front Transvestite, Transsexual and Drag Queen Group of whom the most prominent activists were Rachel Pollack and Roz Kaveney. In Trans Britain, given that GLFTTDQG and Men In Frocks are largely occluded, Roz does not appear until p307 and 2007 – despite having been a trans activist since the early 1970s.

The other group is, of course, that run by Charlotte Bach. How can anyone write of trans activism in the 1970s and not include Charlotte? Her first group included Della Aleksander who later, post-surgery, did her own activism. Charlotte was adopted by some of the GLF leaders, and later was taken up by writer Colin Wilson who featured her in several of his books.

Also not mentioned is the short-lived UK branch of Transsexual Action Organisation (TAO) which has almost vanished from history – apart from an account by Stephen Whittle included in Ekins & King’s The Transgender Phenomenon.


Burns mentions the first National TV.TS Conference held at Leeds University in 1974. She claims that it was organized by the Beaumont Society. Really? That is not how it is told in Ekins & King’s account presented in 2007. The Leeds University TV,TS Group published the proceedings, and, as Ekins & King say: “The main organisers were Caroline R., a postgraduate student at Leeds University and June Willmott, the local Beaumont Society organiser”. (Actually June was also in the Leeds TV.TS Group and in TAO – so she was not a typical BS member). TAO and GLF were active as were Della Aleksander and a researcher from Charing Cross GIC. This conference also seems to be the first recorded use of the term ‘transgender’ in Britain – I would have thought that worth mentioning.

Then having overstated the role of BS at Leeds, Burns makes no mention of the follow-up Conference at Leicester in 1975, which was indeed organised by the Beaumont Society, with a narrower range of participants.

After commenting on how trans surgery seemed exotic as the most famous trans women, April Ashley and Jan Morris went to Dr Georges Burou in Casablanca, Burns then says “treatment closer to home was already a possibility from the mid-1960s, when John Randell established a clinic at the Charing Cross Hospital”. Except, of course, Randell was appointed at Charing Cross way back in 1950, and was working with trans persons shortly afterwards. (See more on the 1966 claim.)

Burns rightly stresses the importance of Julia Grant’s transition and the CX-GIC’s treatment of her as recorded in the 1979 BBC documentary A Change of Sex.