EN.Wikipedia. Yes, that Bram Stoker, the author of Dracula. Today we would object to trans persons being included in a book on imposters, but this was 1910. Includes essays on Hannah Snell, La Maupin, Mary Easy, D’Eon and the Bisley Boy/Elizabeth Tudor.

Havelock Ellis. Studies in the Psychology of Sex. Vol 7 Eonism and Other Supplementary Studies. FA Davis 1928. 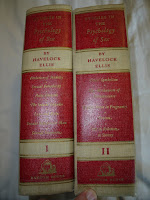 Ellis was aware of Hirschfeld’s Die Transvestiten, but disagreed with his terminology. In 1913 Ellis proposed the term 'sexo-aesthetic inversion' to describe the phenomenon. In 1920 he coined the term eonism, which he derived from the name of a historical figure, Chevalier d'Eon. Ellis explained: “On the psychic side, as I view it, the Eonist is embodying, in an extreme degree, the aesthetic attitude of imitation of, and identification with, the admired object. It is normal for a man to identify himself with the woman he loves. The Eonist carries that identification too far, stimulated by a sensitive and feminine element in himself which is associated with a rather defective virile sexuality on what may be a neurotic basis.” Weirdly ignored in Phyllis Grosskurth’s study of Ellis.

Michael Dillon. Self: A Study in Ethics and Endocrinology. William Heinemann Medical Books, 1946.

The first book anywhere by a trans person that discusses transsexuality, although it does so as a sub-type of ‘homosexuality’.

Roger Baker. Drag: a History of Female Impersonation on the Stage. Triton Books, 1968.

The performivity end of the spectrum. Features tales of impersonators who later transitioned, but also many who did not.

Review. The author of the hoax trans biography, Man into Woman, 1964, and several books on self confidence and psychology. He was also a female impersonator. Offer a typology and concludes: “From his observations, the author is convinced that the transvestite is far happier than the trans-sexual. Life is by no means so complex, so painful, or so embarrassing for them. The future is not obscured by a mist of hopefulness and doubt. The best of two worlds lies within the transvestite's grasp, for he can change from male to 'female' at will. The author concludes, therefore , that the sex-change phenomenon is wholly and completely disastrous, and that medical bodies the world over are seriously at fault in encouraging it in any way when other means of therapy are surely at their disposal to help these unfortunate people." Reaches conclusion similar to Virginia Prince without having heard of her.

Much less scholarly than Roger Baker’s book. The Oakley and the Montmorency book were both published in 1970. Both books are the same size and shape, both are dominantly yellow and both have a partial title but no author on the spine. One is published by Morntide and the other by Luxor. However both Morntide and Luxor give their address as 50 Alexandria Road, London SW19.

Peter Ackroyd. Dressing Up: Transvestism and Drag, the History of an Obsession. Simon and Shuster. 1979.

Review. Ackroyd’s first non-fiction book. While openly gay, he describes himself as an outsider to this subject. “Some transvestites are exclusively fetishistic; they dress, in other words, to obtain some kind of sexual arousal. Psychoanalysts believe this to be the dominant mode of transvestism and, indeed, many transvestites remain fixed at this stage, assuaging their obsessions by frequent or intermittent cross-dressing. But there are other transvestites who move out of the fetishistic stage; they cease to be sexually excited by the act of cross-dressing itself, and go on to a more comprehensive form of feminine ‘passing’.” This book was in the bibliography of almost every book on trans in the 1980s.

The 19th century pioneer gay activist left many press cuttings, including on transvestism,

Review. Despite its ill-chosen title, this book traces trans history from the 1940s when there was almost nowhere for trans persons to go, and shows how performance went from being the only option to one of several options. Kirk found many of his interviewees at the London TV/TS Group. My choice for the best English trans history book. "If there is any one lesson to be learned from studying this field it is that the individual is individual. People define themselves and the self-definition must always take priority over the received wisdom. I have met self-defined draq queens whom others would describe as TV either because they enjoy 'passing'; or because they 'dress' so often that it could be seen as a compulsion; or because they wear lingerie, either to turn men on or to make themselves feel sensuous. I have met drag performers who have grown to dislike drag, and men who insist on being called 'cross-dressers' because they dislike what the word 'drag' stands for, and men who wear part-drag in order to create confusion and doubt amongst others, but who would never wear full drag because that would defeat their object. I know self-defined TVs who are gay or bisexual or oscillating, some of them having learned to cross this sexuality barrier through their cross-dressing. I have met TVs who dress like drag queens and drag queens who dress like TVs, and TVs whose cross-dressing has encouraged them to question their 'male role', which in turn has made them examine their idea of 'femininity'. And perhaps most important of all, I have learned how marshy a terrain is the middle ground between our earlier clear-cut distinction between transvestites and transexuals."

Hodgkinson found her interviewees at SHAFT. Two years before her full-length biography of

Concentrates on the wives of transvestites. She also found interviewees at the London TV/TS Group.

Dave King. The Transvestite and the Transsexual: Public categories and private identities. Avebury, 1993.

A neglected but quite useful history of both trans persons and the doctors.

Roger Baker. Drag: a History of Female Impersonation in the Performing Arts.

Not an expansion of the 1968 book, as content from that has been removed. A rewrite with a much more positive attitude.

Farrer wrote many books analysing trans content in various publications. This is probably the best.

Includes 40 pages of source documents on ‘cross-dressing women’. Oram regards them as lesbians, but many seem to be trans men such as Victor Barker, James Allen, Harry Stokes,

The major work from Ekins and King. Some of their conclusions are odd (e,g, their support of Blanchard and Prince) but the book includes history not found anywhere else.

PDF. A neglected but very useful publication. More detail on Lennox Broster than anywhere else; cover the Charing Cross clinic, the press, glands and hormones and sport. One gripe is that she refers to Norma Jackson only by her male name.

Review. A history of queer London. Transvestites are discussed from 1394 to The Well of Loneliness in 1928, but not a single one after that, and also no transsexuals at all.

Review. Burns’ historical chapters keep over-emphasising what the Beaumont Society achieved and minimises what the other groups achieved, but will spread the story.

This encyclopaedia contains many entries applicable to English trans history, as well as that of the rest of the world.
Time: 15:36

Email ThisBlogThis!Share to TwitterShare to FacebookShare to Pinterest
Labels: bibliography